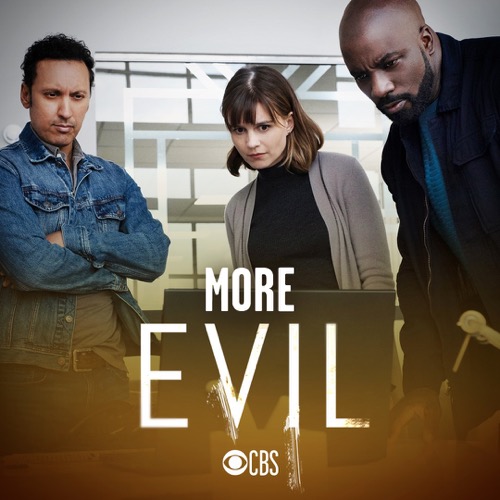 Tonight on CBS Evil premieres with an all-new Thursday, November 14, 2019 episode and we have your Evil recap below.  On tonight’s Evil season 1 episode 7 as per the CBS synopsis, “When Bridget confesses to murder during her exorcism, Monsignor Korecki asks Kristen, David and Ben to investigate if the details match any open cases and if the woman really is possessed by a demon.”

Tonight’s Evil season 1 episode 7 airs and looks like it is going to be great and you won’t want to miss it. So make sure to bookmark this spot and come back from 10 PM – 11 PM ET for our Evil recap.  While you wait for the recap make sure to check out all our Evil recaps, spoilers, news & more!

Tonight on Evil, assessors sent by the pope come to question the team about the prophet Grace and want to know if she was a true prophet. Kristen and Ben tell them they didn’t believe she was, David says he believes she was but she is still in ICE custody and was sent back home. The team agrees to continue the interview by the assessors and David asks to see the full book of the Codex and Kristen recognize something from the book similar to a drawing one of her kids has made in her journal that Leland gave her.

The team is asked to watch a video of an exorcism where Bridget confesses to a Murder, she began speaking in different languages after a miscarriage, Monsignor Korecki asks them to investigate as he believed she is innocent and possessed.

Kristen and her friend Mira, who is a cop, discuss the missing boys and the murder of Enrique who the possessed woman Bridgette has confessed to the killing, Mira asks Kristen where did she get information about the murder since certain information wasn’t released to the public, Kristen refuses to tell her saying it’s confidential.

Kristen goes to the home of Bridgette and tells David about the murder and the missing boys. They enter the bathroom where the exorcism is being performed, Bridgette is possessed by a demon named Howard who David warns Kristen not to be afraid of. Kristen begins to question Bridgette about Enrique and she admits she killed him and the other boys, she asks her for the location of the boys and Bridgette gives her a location and the names of the boys, and then attacks Kristen by jumping on her.

David believes that she is possessed and Kristen thinks she is not since she knows details the public doesn’t.

Leland takes interest in giving therapy to a young man named Sebastian who he sees get turned down by the waitress Linda in a coffee shop. He tells him he needs to get revenge on her.

Sebastian goes back to the coffee shop and gives Linda a gift box when she opens it she screams. Sebastian goes back to Leland to tell him and Leland is pleased and then invited him to a meeting held by a secret group of men who share Leland’s view towards women. During a video, group chat the men decide to take out violent action against some random women

David tells Kristen that’s Leland was targeting her and tells her to burn the journal’s, Mira stops by Kristen’s to question her some more about the missing boys and stars because she knows information not released to the public she is a person of interest and warns her to reveal what she knows.

Back at the exorcism, Kristen speaks to the demon Howard, about the boys but he refuses to give her more information saying he doesn’t like her anymore. Kristen then mentions the miscarriage Briget had and begins crying and other personalities come out and she faints.

Kristen goes to the location Howard gave her on where to find the body of the boy’s and calls Mira to tell her the location of bodies. Ben overhears Bridget’s husband Dwight on the phone with 911 telling them what she has done with the three boys, the police soon show up and arrest Bridget but she protests that she’s innocent. The team comes to a group decision that Dwight is the one who murdered the boys and is making it seem as if it was Bridget, David takes matters into his hand to find out the truth, he returns to the house and sees Dwight with souvenirs from the crime scene that he is trying to hide, he picks up a knife and lunges at David but David chokes him, and he faints. David also discovers a clue on a piece of wood in the home that is from the Codex book. The police arrest Dwight and release Bridget

The assessors review the surveillance tapes from the ICE camp and it reveals what Grace was drawing and helps them decide another map in the book of Codex. The team examines the Codex book even more and believes Leland is a psychopath with followers he’s trying to recruit, the markings on the map are of drawings David has seen before from his father.