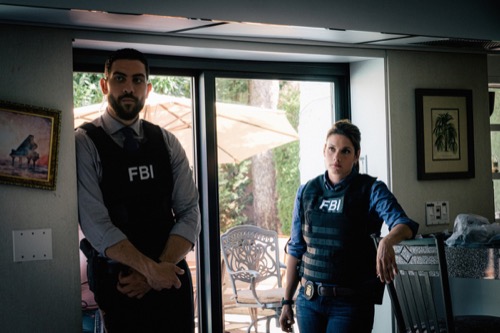 Tonight on CBS FBI airs with an all-new Tuesday, October 22, 2019, season 2 episode 5, “Crossroads,” and we have your FBI recap below. On tonight’s FBI season 2 episode 5 as per the CBS synopsis, “A loving husband and father is kidnapped after accidentally getting involved in illegal dealings far beyond what he imagined. Also, Jubal must make a difficult decision regarding his family and their future.”

Tonight on FBI, Valentine’s ex-wife tells him she wants to take the kids and move out of town with her fiancé. Valentine is investigating a possible abduction of a man named Jim who was driving in the opening scene and seen pulled over by an unmarked police car but then the men kidnap him.

The team go and ask his wife some questions along with his employer if they noticed anything unusual. While agents Bell and Adom are at Jim’s house they find an envelope full of money and unexpected men with guns come to the house and a shoot out erupts then men getaway.

Agent Chazal and Scola gets the GPS routes from his employer, Jim drives trucks and makes deliveries they noticed he made a detour and discover a muddy shovel in the truck he was driving.

They go to the location and discover that he buried $500,000 worth of cocaine they bring his wife in for questioning, she tells them Jim picked up a side job delivering counterfeit handbags to a destination for extra cash.

They find a blood match from the crime scene same as the man named Luna who approached Jim to deliver the bags. Adom and Bell then bring in a man who was seen having lunch with him for interrogation, midway the DEA agent comes in to stop it stating the man is their informant.

Adom and Bell head to the hotel they think Luna maybe but it empty they search his computer and get a lead to a warehouse in Brooklyn where they go search and find a junkie next to Luna’s dead body, he tells them he found Luna laying there and just took his cash but he didn’t kill him, Jim is still missing.

After ballistic matches come back from the gun weapon from Luna shooting its matched to his partner’s gun Pedro Velez and they go to a restaurant he owns. Agent Bell and Chazal go undercover and pose as two regulars females looking to have fun, Bell gets caught by Velez’s associate friend Madrigal snooping around and the men leave and begin to be on the move, the team follows them as they drive to a house and meet with the DEA informant Boaz.

As they are about to make the decision to move in on the men a DEA agent tells them not to because Boaz is in on an operation to deliver El Patron head of the Juarez cartel to the DEA.

Agent in charge Isobel decides to move in on the house to save the American citizen and quickly gunshots fire, they siege the men and women in the house and find Jim locked inside a closet laying on the floor.

While in the hospital Jim is reunited with his family tells the FBI the men wanted to kill him but El Patron didn’t want to until Jim told them where the cocaine Jim buried was hidden. Valentine decides to let his ex-wife move his children to Scarsdale After a talk with agent Bell who tells him it’s the right move and the distance isn’t that far.