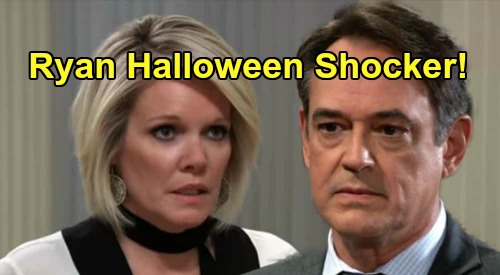 General Hospital (GH) spoilers tease that viewers are in for a GH Halloween to remember. As viewers know, the show likes to do special episodes for the holidays. After all, last year on Halloween, nurse Mary Pat Ingles (Patricia Bethune) was murdered by Ryan Chamberlain (Jon Lindstrom) and her head popped up in a barrel at The Floating Rib! GH spoilers say that we should have a memorable Halloween this year as well, albeit less gruesome and without a murder.

However, there will still be some intrigue and danger involved for one Port Charles resident. Ava Jerome (Maura West) has had a tough year, thanks to Ryan. Ryan murdered her daughter Kiki Jerome (Hayley Erin), and ever since, Ava’s been on a journey of redemption. She’s tried to “communicate” with Kiki via psychic mediums in order to gain some closure, but that hasn’t really worked. Now, she’s back in Ryan’s orbit, periodically visiting him at Pentonville.

According to GH spoilers, the big Halloween celebration will kick off at The Metro Court this year. We’ll likely see various Port Charles residents in some fun costumes and generally having a great time at the event. But there will be a little trouble for Ava, who will be in attendance. She’ll go to the gathering, but when she leaves to return back to her gallery, she’ll sense that someone’s following her. It will turn out to be a masked man, and Ava will be totally spooked.

Well, we can’t help but wonder whether this masked man will end up being Ryan. He clearly has something up his sleeve, since he recently asked fellow inmate Nelle Benson (Chloe Lanier) for a big favor when and if she gets released on parole. He might just have an escape in mind – could he actually bust out of Pentonville and stalk Ava once again? Or will the masked man perhaps be someone that Nelle has arranged to follow and spook Ava for Ryan?

Time will tell, but it certainly seems that Ava and Ryan aren’t through just yet. We couldn’t help but notice that during their last Pentonville visit, Ryan seemed irritated and quite jealous to hear that Ava had a new male therapist, and that she was revisiting Nikolas Cassadine’s (last played by Nick Stabile) death. Ryan clearly feels that Ava is “his,” and might just take steps to make sure that she stays his!

At any rate, something big will go down with Ava this Halloween, and we’ll see if Ryan is somehow behind it. Do you think that Ryan will actually escape from Pentonville and go after Ava? Stay tuned to the ABC soap and don’t forget to check CDL often for the latest General Hospital spoilers, updates, and news.