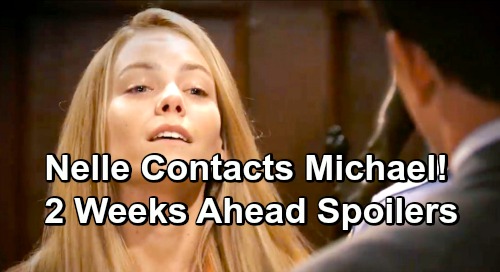 General Hospital (GH) spoilers tease that Willow Tait (Katelyn MacMullen) will continue to use Michael Corinthos (Chad Duell) to her advantage. When she ran into Michael at Charlie’s Pub, she was happy to sit down and spend some time with “Wiley” Cooper-Jones. Willow bailed on her yoga session so she could hang out with the kid she believes is her son.

Julian Jerome (William deVry) warned Brad Cooper (Parry Shen) about the dangerous situation, but there may not be much either one of them can do. Willow established a nice friendship with Michael before his connection to Wiley was even revealed. Michael clearly wishes he would’ve made his move before Harrison Chase (Josh Swickard), but he’ll settle for being pals if that’s all he can get.

In other words, Michael will be eager to keep bonding with Willow and she’ll gladly let him – especially if it means more time around “Wiley.” Willow liked Michael anyway, but the fact that he’s “Wiley’s” godfather gives him extra points. GH spoilers say their connection will pose a shocking risk to Brad’s scheme.

However, we can’t forget about Brad’s locked-up partner in crime. Nelle Benson (Chloe Lanier) is the one who roped Brad into all this. If she hadn’t talked Brad into swapping Jonah Corinthos for Willow’s dead baby, Brad wouldn’t be living in constant panic mode. It’s been a while since we’ve heard from Nelle, so you know what that means. It’s almost time for Nelle to stir the pot again!

On February 13, General Hospital spoilers say Nelle will contact Michael. Will she write him another cryptic letter and pass along more clues? Could Nelle try to summon Michael for a chat? Liesl Obrecht (Kathleen Gati) knows about the baby switch now, so Nelle’s undoubtedly been mulling over that behind bars. She’s surely worried that Liesl’s going to blab and ruin everything eventually.

It’s possible Nelle will just be putting some feelers out to see if anything’s been spilled. She would’ve heard by now if Liesl had said too much, but she could still wonder what Michael knows so far. Then again, Nelle could be tempted to beat Liesl to the punch and drop the bomb herself. If the plot’s going to be spoiled anyway, Nelle would want to be the one to deliver that blow.

Of course, Nelle won’t just come right out and admit that she gave Michael’s son to Brad. Instead, she may just drop some hints and leave Michael curious. Even if Nelle still wants to keep the secret, she can never resist causing drama.

February 13 will also bring some distressing moments for Brad. Perhaps he’ll find out about Nelle getting in touch with Michael. That’d certainly be a reason for Brad to feel uneasy as we head into the next phase of the baby swap storyline.

Are you excited to see Nelle’s next vengeful move? What will she tell Michael when she reaches out? We’ll give you updates as other General Hospital news comes in. Stick with ABC’s GH and don’t forget to check CDL often for the latest General Hospital spoilers, updates and news.