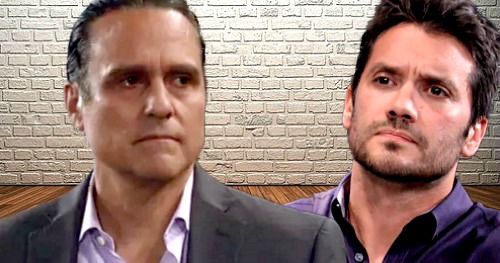 General Hospital (GH) spoilers tease that Sonny Corinthos’ (Maurice Benard) search for Dante Falconeri (Dominic Zamprogna) will continue. He’s determined to track his son down and bring him home where he belongs. Unfortunately, that mission has already come with grave danger. Sonny might’ve gotten himself killed if Robert Scorpio (Tristan Rogers) hadn’t showed up to help.

Although Sonny’s first meeting was a bust, perhaps his next one will prove more beneficial. Robert suggested they could score some crucial info out of it. GH fans can expect Sonny to soak up everything he learns and get to work. He can’t rest until he knows Dante’s safe and sound. The longer this goes on, the more worried Sonny will become.

Luckily, Robert will be there to keep Sonny’s head in the game. Sonny can’t let his emotions get the best of him. He needs to keep his thoughts focused on finding Dante, not on the tragic possibilities. General Hospital spoilers say Sonny and Robert will eventually make progress. A huge breakthrough in the case will point them in Dante’s direction.

Of course, it’ll also point them toward some dark forces. Dante’s made fierce enemies thanks to his work with the WSB. Now he’s in desperate need of help, so his dad’s doing his best. Sonny will be willing to face death for Dante on March 18. General Hospital spoilers say he’ll put his own life on the line to save his son.

On March 19, an astonishing command will be given. Sonny will be the one who delivers this order, so it should be interesting to see how it plays out. Will Sonny find Dante locked up somewhere? General Hospital spoilers have already suggested Dante might be a prisoner. Perhaps Sonny will pull a gun on the guard and demand that the door be opened. That’d certainly be an astonishing command!

Dominic Zamprogna will be onscreen as Dante soon enough. He’s shot four episodes so far and has filmed some good scenes with Benard as well as Emme Rylan (Lulu Falconeri). It sounds like Dante’s rescue won’t take long once he’s actually discovered.

General Hospital viewers won’t want to miss all the shockers. We’ll give you updates as other GH news comes in. Stay tuned to the ABC soap and don’t forget to check CDL often for the latest General Hospital spoilers, updates and news.