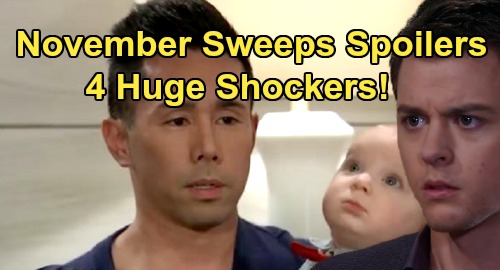 General Hospital (GH) spoilers tease that major drama will hit Port Charles. As we move into the heart of November sweeps, there’ll be plenty of revelations and shakeups to keep fans interested. Let’s look at the four huge bombshells and talk about what you can expect in the coming weeks. Here’s what General Hospital viewers need to know.

Nikolas Cassadine (Marcus Coloma) is back from the “dead” and ready to make Valentin Cassadine (James Patrick Stuart) regret his actions. However, the plan’s sure to bring some curveballs. Nikolas’ survival alone will throw several PC residents for a loop. Despite Nik’s efforts to keep things quiet for a while, the news that he’s alive will stun several key players.

It looks like Carly Corinthos (Laura Wright) will get dragged into this, but Jasper “Jax” Jacks (Ingo Rademacher) won’t want her spilling anything to Sonny Corinthos (Maurice Benard). Lulu Spencer (Emme Rylan) will ultimately learn Nikolas is alive as well. She’ll definitely want some answers about where Nik’s been and what he’s been up to. Nikolas’ reappearance in town will also tie in with Cassandra Pierce’s (Jessica Tuck) storyline, so this bomb will explode in many ways.

2) ‘Drew’s’ Decision Alters the Course of His Life

“Drew Cain” aka Franco Baldwin (Roger Howarth) was given the freedom to choose at his court hearing. Elizabeth Webber (Rebecca Herbst) feels like that choice has already been made, but it seems she’s wrong. “Drew” will wrestle with an identity crisis, especially in light of his fractured relationship with Kim Nero (Tamara Braun).

Kim will be looking for closure soon, so “Drew” may close that chapter of his life – and could perhaps accept it wasn’t his life at all. “Drew” has a crucial decision coming up soon that’ll change the course of his life. The memory procedure should move forward, but what will the outcome be? “Drew” could become more “Drew”-like if his memories intensify, and there’s a good chance they will.

3) Peter Spirals Out of Control

That brings us to Peter August (Wes Ramsey). He’ll spiral out of control in the weeks ahead as he works to cover his tracks. The more desperate Peter gets, the greater the chances he’ll get caught. Peter is destined to be exposed as a sinister criminal eventually. He hasn’t really put his sinister ways behind him. Peter can rationalize things all he wants, but it doesn’t change the fact that he’s lethal.

Peter’s hot plot will naturally connect to Franco’s. Since “Drew” could remember something he shouldn’t, Peter will want to keep an eye on this situation. He may take drastic action in hopes of preventing Franco’s procedure. If that doesn’t work, “Drew” may be at risk after more “Drew” memories potentially surface.

Jason Morgan (Steve Burton) will do everything he can to point the finger at Peter, and he’ll get some help along the way. Robert Scorpio (Tristan Rogers) and even Valentin Cassadine (James Patrick Stuart) may be useful allies. Anna Devane (Finola Hughes) will also rejoin the Port Charles scene, and she’s not going to like what she uncovers about Peter. Throw in the Violet Finn (Jophielle Love) chaos and Anna may feel a bit in over her head!

Will “Wiley Cooper-Jones” (Erik and Theo Olson) will be revealed as Jonah Corinthos for November sweeps? GH fans are beyond ready for this story to end, so everyone can keep hoping Michael Corinthos (Chad Duell) will learn the truth soon. Whether that happens now or later, the baby swap chaos is building to a shocker.

Julian Jerome (William deVry) and Brad Cooper (Parry Shen) will both play with fire. Whenever that happens, someone’s bound to get burned. After Julian’s blackmail of Brad is exposed, Lucas Jones’ (Ryan Carnes) reaction will lead to more conflict.

This could also set up Julian’s incredibly difficult decision, which may involve coming clean to Lucas about “Wiley.” There’s no guarantee Julian will confess, but it’s clear that Brad’s getting backed into a corner. If Brad himself doesn’t crack, Julian just might!