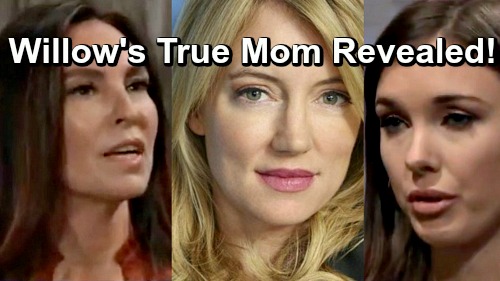 General Hospital (GH) spoilers tease that Willow Tait (Katelyn MacMullen) could be in for a huge surprise. During a heated conversation with Harmony Miller (Inga Cadranel), Willow insisted that Harmony was supposed to protect her. She pointed out that Harmony was her mother, but she convinced her to buy into Shiloh Archer’s (Coby Ryan McLaughlin) dangerous dogma.

Harmony has clearly been brainwashed into Shiloh’s way of thinking like all the rest, but she’s also part of “The Trust.” That means Harmony handed over a risky pledge once upon a time. Shiloh uses each member’s trust offering as leverage so he can control his most-prized followers. Even if Harmony faced moments of doubt, she would’ve felt obligated to stay out of fear.

What could Harmony’s trust offering be? It has to be a substantial secret, so we’re betting she revealed that she’s not Willow’s biological mother. Willow probably has no idea that Harmony is her adoptive mom instead. There’s a good chance Harmony ended up with Nina Reeves’ (Michelle Stafford) baby after Madeline Reeves (Donna Mills) stole the her.

If Harmony provided the half-heart pendant as part of her pledge, that’d be even better. Since GH introduced that little piece of the puzzle, it’ll have to come back into play eventually. General Hospital fans have also noticed the extreme tension between Willow and Nina. The hate each other with a passion, which is the usual setup when a mother’s about to find her long-lost child.

Willow has criticized Nina’s step-mothering skills on more than one occasion. She blamed Nina for Charlotte Cassadine’s (Scarlett Fernandez) bratty tendencies, so Nina even tried to have Ms. Tait fired. There are always some strong emotions going on, so it should make for an intriguing big reveal.

General Hospital hasn’t given confirmation on Willow and Nina’s connection just yet, but it’s certainly a safe bet. Michelle Stafford will likely be around for the Sasha Gilmore (Sofia Mattsson) shocker. GH could’ve easily chosen to drop the real daughter portion of the story and let Nina leave town in despair.

Instead, they recast Nina with Cynthia Watros, which tells us Nina’s storyline is pressing on. It sounds like Watros’ Nina will be the one who plays all the Willow chaos down the road. Both Willow and Nina may be floored by this massive secret Harmony’s been keeping.