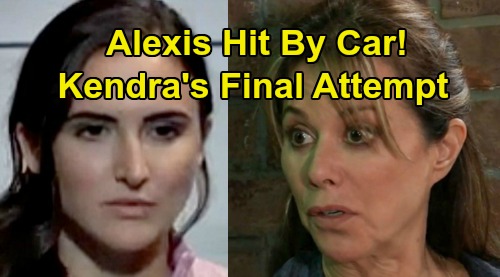 General Hospital (GH) spoilers tease that Alexis Davis (Nancy Lee Grahn) will find herself in even more danger. You’d think things couldn’t get much worse for Alexis, who’s already battling strange symptoms thanks to her personal trainer. Alexis had to be hospitalized because of Kendra Lennon’s (Michelle Argyris), but at least she’ll get part of the story next week.

GH fans can expect a startling diagnosis for Alexis. Hamilton Finn (Michael Easton) will likely explain that she’s been ingesting some sort of poison that’s hard to detect. It shouldn’t be too hard for Alexis to settle on the supplement as the only thing out of the ordinary. However, that doesn’t mean Kendra will be suspected of foul play – at least not right off the bat.

After all, Alexis doesn’t know about Kendra’s link to Kiefer Bauer (Christian Alexander) or her connection to Shiloh Archer (Coby Ryan McLaughlin). She thinks Kendra’s a sweet girl who genuinely cares about her well-being, so Alexis might hold the company at fault initially.

Of course, Julian Jerome (William deVry) found a dead rat who’d been rummaging through his dumpster – where Kendra disposed of the poisoned supplement. He also seems a bit suspicious of Kendra, so he could be crucial in putting some clues together. As for Neil Byrne (Joe Flanigan), he’ll also work on solving this puzzle, but he’ll form the wrong theory at first.

All this chaos will collide into a shocker around Thanksgiving. In fact, it looks like Alexis’ storyline could collide with another one – quite literally! Some strong GH buzz out there suggests Alexis will be involved in a car-related incident. We’re hearing that Brad Cooper (Parry Shen) will tie in as well.

To figure out where this hot plot is headed, let’s consider the clues. It makes perfect sense for Kendra to realize her supplement plan failed and try another way – particularly the way Alexis killed Kiefer. Kendra wants to avenge her brother’s death, and what better strategy than plotting death by automobile? Word has it Kendra will hit Alexis with her car and could leave her target seriously injured.

Before that, General Hospital spoilers say Alexis will happen upon the truth. Meanwhile, the clues will click into place for Neil. Alexis and Neil could easily be finding out two different things here. Since Brad’s apparently involved in this mess and could be part of the collision, will Alexis discover “Wiley Cooper-Jones” (Erik and Theo Olson) is actually Jonah Corinthos?

That could set it up where Alexis potentially has some memory loss after her ordeal. She may not remember what she learned just before she was struck. As for Neil, he could be the one who makes sure Kendra goes down – perhaps with an assist from Julian.