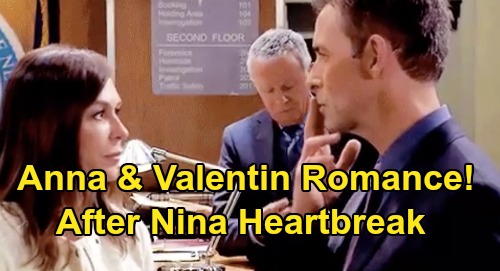 General Hospital (GH) spoilers tease that Valentin Cassadine (James Patrick Stuart) could find himself in need of a new love interest. Things seem to be on the verge of exploding in a big way with Nina Reeves (Cynthia Watros). How many times can Nina possibly forgive and forget? Even if GH ultimately puts Nina and Valentin back together, it’s clear that they could stand to rest this pairing for a while.

Nina was torn about going after her revenge, but Liesl Obrecht’s (Kathleen Gati) admission seemed to change that. The confirmation of Nina’s suspicions appeared to strengthen her resolve. If she goes through with her plan to destroy Valentin, what then? Valentin’s sure to be crushed – especially since General Hospital writers might change Charlotte Cassadine’s (Scarlett Fernandez) paternity, too.

Who will pick up the pieces of Valentin’s broken heart? There’s one option that many fans have been rooting for. Valentin and Anna Devane (Finola Hughes) might seem like an odd match based on their history, but sometimes complicated histories can create the best pairings. Hughes and Stuart actually have some sizzling chemistry in their scenes together.

Hamilton Finn (Michael Easton) will have Violet Barnes (Jophielle Love) and his work at the hospital to give him airtime. He’ll be just fine even if “Fanna” breaks up. Finn and Anna honestly fall a little flat since they’re both such good people. It could be more fun to watch Anna try to tame Valentin a bit.

Of course, Valentin could be humbled by all the losses he’s set to endure. In addition to Nina and possibly Charlotte, Valentin’s fortune could wind up back with Nikolas Cassadine (Marcus Coloma). Once he’s stripped of everything he holds dear, Valentin could be in a pretty vulnerable place. It’s easy to imagine Anna reaching out to him in his time of need.

When Anna first returned to town, she immediately got caught up in Charlotte’s kidnapping crisis. Valentin was grateful to Anna for saving Charlotte, which led to a tender moment between them. It was the kind of thing that could certainly set up a pairing down the road. The tension of the past seems to have lifted and that’s half the battle.