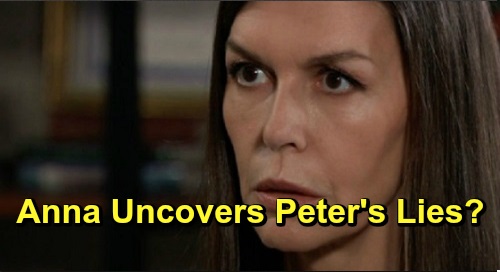 General Hospital (GH) spoilers tease that Anna Devane (Finola Hughes) will soon sense that something’s off with Peter August (Wes Ramsey). As GH viewers know, Peter’s got a huge secret. He was directly involved in the capture of Drew Cain (Billy Miller) from Afghanistan a few years back. Viewers were shown in flashbacks that Peter was present the night that Drew was taken by Helena Cassadine (Constance Towers) and that he was working for her.

That’s a big enough secret right there, but there’s more. Once Shiloh Archer (Coby Ryan McLaughlin) threatened to expose Peter’s prior involvement with Helena, Peter tried to have Shiloh killed. He also tried to have Andre Maddox (Anthony Washington) killed, and it appears that he was successful in having Drew killed. It was a major coverup attempt, and Peter’s still worried about the possibility of his misdeeds coming to light.

Peter was noticeably unnerved to see Andre at Anna’s house for the Thanksgiving celebration, and he got even more agitated when he learned that Andre was going to perform a reversal procedure on Franco Baldwin (Roger Howarth). Of course, Franco is currently “Drew” and wants to have the reversal procedure done so that the real Franco can come back. This upsets Peter because the reversal procedure isn’t an exact science and could end up intensifying “Drew’s” memories.

And if that happens, then there’s a good chance that “Drew” will remember something that could implicate Peter and totally destroy his relationship with Maxie Jones (Kirsten Storms). Peter wants to protect his relationship with Maxie at all costs, especially since the two will soon be moving in together. That’s led some GH fans to suspect that Franco’s life could be in danger, depending on how the memory procedure turns out.

Well, all of this has taken its toll on Peter, who is a nervous wreck. And now that Anna is back in town and is reconnecting with Peter, GH spoilers say that she’ll soon detect that something is very off with him. Of course, Anna’s a very curious person, and it’s likely that she won’t let it go when she realizes that there’s something under the surface that’s got Peter nervous.

In fact, we could see a situation in which both Anna and Maxie could work together to figure out what’s up with Peter. Or perhaps Anna will just take it upon herself to so some sleuthing. If she were to follow Peter and overhear him on the phone with his henchmen discussing what to do about the Franco memory procedure situation, then that could pique her curiosity. And it’s pretty likely at this point that Peter will be monitoring Franco’s procedure very closely.

We’ll see what happens here, but it seems that the two people most likely to uncover what Peter has done at this point are Anna and possibly Robert Scorpio (Tristan Rogers), although he’s busy being the DA. Damian Spinelli (Bradford Anderson) was on the case for a while, but he’s not around much, and he can’t be close to Peter in the way that Anna can. Perhaps Anna will be the one to ultimately uncover what Peter has done.

What do you think? Will Anna be the one to finally bust Peter? Stay tuned to the ABC soap and don’t forget to check CDL often for the latest General Hospital spoilers, updates, and news.