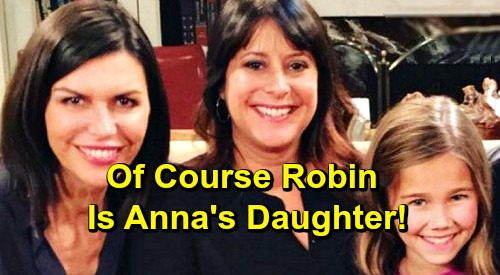 General Hospital (GH) spoilers reveal that Anna Devane (Finola Hughes) really needs to get a clue. She used to be a top-notch spy and overall brilliant woman, but her character’s been written as rather dense lately. Anna is on the wrong track when it comes to which memory of Alex Devane Marick’s (Finola Hughes) was planted.

GH fans know Anna has always felt connected to Robin Scorpio-Drake (Kimberly McCullough) and never once considered the idea that Robin may not be her child. Even when Robin was being raised by someone else, Anna tried to spend whatever time she could with her. She’s protected Robin from the day she was born, so Anna and Robin truly have an unbreakable bond.

Why would Anna consider the possibility of Robin being Alex’s daughter instead of her own? Anna’s logic in this matter makes no sense at all. Peter August (Wes Ramsey) is the child Anna has been struggling to connect with. Anna can’t help it if she sees Cesar Faison (Anders Hove) whenever she looks at Peter. She’s trying to get away from that, but it’s always going to be a barrier.

Anna was able to walk away from Peter – or so she thinks – and not look back at all. She never searched for or mentioned this son before the past couple of years. Anna surely would’ve told Robert if she had a child with Faison. She would feel connected to her kid if he was truly hers.

What’s it going to take for Anna to realize Peter is the one who belongs to Alex? Dr. Hamilton Finn (Michael Easton) and Robert Scorpio (Tristan Rogers) will help Anna as she inches toward the truth, but she really shouldn’t need their assistance. There’s no reason a smart woman like Anna can’t figure this out.

Maybe GH writers should put Alex in the room with Peter and see what her reaction is. Anna thinks Alex handed her a child to raise and was prepared to rip that kid away if the truth ever came out. Plenty of facts never quite fit in this long-lost son storyline for Anna. It’s a no-brainer to say Peter is the manipulated part of Anna’s memories.

Just like Drew Cain (Billy Miller) had no emotional connection to people in Jason Morgan’s (Steve Burton) life, this could explain Anna’s lack of connection to Peter. General Hospital spoilers hint that Anna will put the puzzle together eventually, but she’s taking her sweet time! Would you like to see Anna get back to her old brilliance?