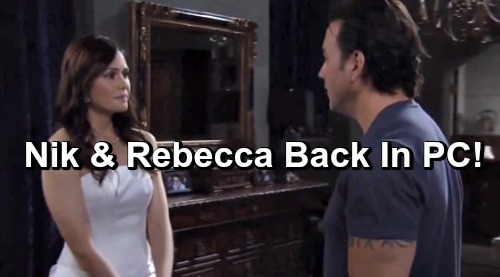 General Hospital spoilers reveal that a new social media message by Tyler Christopher (former Nikolas Cassadine), who is famous for cryptic tweets when something is going on with his career, has GH fans buzzing about the possibility a return to Port Charles.  Tyler’s latest  tweet, see below, is certainly one to make fans question what is going with Nik.

Some General Hospital fans believe that Nikolas Cassadine faked his death again in 2016 either with Valentin Cassadine’s (James Patrick Stuart) help or because of Valentin taking over the Cassadine estate. Some fans never thought that Nikolas was dead and always looked for his return.

Spencer Cassadine (Nicholas Bechtel) needs his father because his jet setting between countries at the drop of a hat is going to even up getting him hurt or killed. General Hospital spoilers if Nik could be on the way to save his son since Laura Webber (Genie Frances) doesn’t have the time to watch over Spencer and be mayor of Port Charles?

Has Rebecca Been Taking Care Of Nikolas?

Tyler suggests that Nikolas could be with General Hospital’s Emily Quartermaine’s (Natalia Livingston) twin Rebecca Shaw (Natalia Livingston). Rebecca left town in 2009 to move to Paris, France, which is about a days drive from Greece and Cassadine Island.

When Nikolas fell out of the window on Cassadine Island, did he make his way to Rebecca to help him recover from being shot and almost drowning? Nikolas and Rebecca have previously had a relationship, and GH buzz says it wouldn’t be a far stretch for Nikolas to turn to her for help.

Tyler Vacated His Days of Our Lives Role

Tyler left the role of Stefan Dimera on Days of Our Lives months ago and would certainly be able to return to General Hospital if he could make a deal with GH executives to do so. This is not the first tweet suggesting a return either; Tyler had tweeted to onscreen son Spencer’s portrayer, Nicholas Bechtel before that they would ride again. Is it time for a reunion of this father and son duo? Could we see more of Spencer if his father returns to Port Charles?

Jax And Alexis Discussing Nik Could Be Another Clue

Jasper Jacks (Ingo Rademacher) has recently returned to Port Charles, and Nikolas has been mentioned between himself and Alexis Davis (Nancy Lee Grahn) a few times. Jax hates Nikolas and would probably join forces with Valentin to take him down.

Things are about to begin to fall apart for Valentin, and it would be the perfect time for Nikolas to come back and claim what he believes rightfully belongs to him. Are all the mentions of Nikolas on the show lately wishful thinking or could Nik be headed back to town with Rebecca in tow? Come back to CDL for all your General Hospital spoilers, update and news!

What? I heard somebody in Port Charles tripped over Nikolas and was like…heyyyyyyy…there…Nik. Hope they found him on a mega yacht in Monaco with Emily’s twin and not rummaging through the dumpster outside the Port Charles Grill. #gh #generalhospital