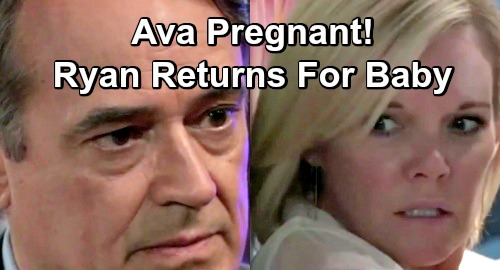 General Hospital (GH) spoilers tease that Ava Jerome (Maura West) will remain devastated and furious over Ryan Chamberlain’s (Jon Lindstrom) actions. A presumed death just wasn’t a fitting end for this character’s latest stint. Ava deserved the chance to take Ryan down herself, so maybe she’ll get it down the road.

In fact, there could be a good reason for Ryan to resurface. What if Ava’s carrying his serial killer spawn? After all, Ava and Ryan had a very active sex life. They had sex both on screen and off, so there were plenty of opportunities for Ava to get pregnant.

As Ava crumbled over her all her Ryan realizations on the bridge, she was horrified about sleeping with him. Ryan’s terrible violation left Ava disgusted. She never would’ve slept with this murderer willingly – especially if she’d known what he did to Kiki Jerome (Hayley Erin).

Ryan had the nerve to take Kiki out and immediately hop into bed with Ava. Her daughter’s body was cold and lifeless across town while she got hot and heavy with Ryan. Of course, they’ve gotten busy many times since then. Did one of those more recent times result in a baby? Can you imagine the shock that would bring?

Many General Hospital fans would probably be outraged over this twist, but there’s no guarantee Ava would actually have the baby. Horrible things tend to happen to pregnant women in Port Charles. Just look at what Carly Corinthos (Laura Wright) went through. Carly’s baby survived for now, but not every expectant GH character is that lucky.

Still, it’d be interesting if Ava learns she’s pregnant and ends up keeping the baby. She could convince herself it’s what Kiki would want. Ava might plan to start fresh with another child and give him or her a good life. She could vow to be a more involved parent this time.

As a bonus, Ava wouldn’t have Sonny Corinthos (Maurice Benard) and Carly to contend with. With Daddy Ryan presumed dead, Ava would be in total control…until Ryan made his way back to town. That’s when he could pop back up and reveal his death didn’t quite stick.

This possible pregnancy could leave Ava even more determined to kill Ryan and protect her new son or daughter. She couldn’t protect Kiki, so saving her next potential little one would be crucial. Do you think Ava could be pregnant? Will Ryan show back up to claim his child?