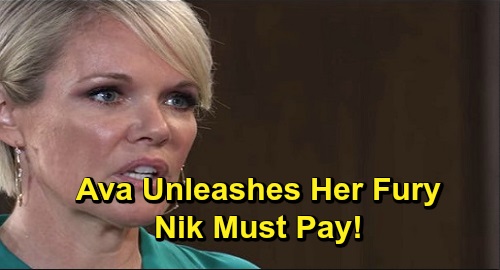 General Hospital (GH) spoilers tease that Ava Jerome (Maura West) has an infuriating discovery in her future. GH fans know Ava was certain she saw Nikolas Cassadine (Marcus Coloma) that night at the gallery. After Nik vanished, Laura Webber (Genie Francis) gently insisted Ava couldn’t have seen her dead son. Ava checked herself into Shadybrook, where she was just deceived once again by Nikolas.

There’s a lot on the line for Nikolas as well as Spencer Cassadine (Nicholas Bechtel), but Nik was awfully cold! It almost feels like GH is trying to make him less likable so that we won’t be disappointed when Valentin Cassadine (James Patrick Stuart) wins again. There’s no guarantee that’s how this storyline will play out, but Nik certainly hasn’t earned his victory yet. He’s botched his plan every step of the way – including when he dropped his Cassadine ring in Ava’s room.

Shouldn’t Cassadines be smarter than this? Some viewers are loving Nikolas’ dark side, but he could use a boost when it comes to intelligence. Of course, some GH fans also feel like Nik went too far with his latest stunt. Lying about Ava sending Kiki Jerome (Hayley Erin) to hell was a creepy low blow.

It would’ve been easier to just come clean with Ava after Nik took off his mask. She surely would’ve wanted to help Nikolas pull off his goal. There was really no reason to drive Ava off the deep end, but Nik consistently makes things more difficult for himself.

Naturally, some General Hospital watchers might argue that this is just a good dose of karma for Ava. She messed with Morgan Corinthos’ (Bryan Craig) meds, and now Nik’s messed with hers. Perhaps Ava questioning her sanity is just teaching her a lesson in some fans’ eyes.

However, it’s a lesson Ava probably won’t learn! She seems poised to get her revenge after the truth about Nikolas comes out. On the bright side, this could be exactly what Ava needs to get her fire back. Ava may decide she’s done wallowing over Kiki and ready to devote her attention to a vengeful cause.

It’s true that Ava recanted her statement, but it’s not like she killed Nikolas herself. He went to extremes and is probably going to end up paying the price for it. On the other hand, this could be an opportunity for love to bloom down the road. That may not seem like a possibility after the horrible scene that unfolded at Shadybrook, but this is a soap!

Even after Ava found out the truth about Ryan Chamberlain (Jon Lindstorm), part of her still seemed intrigued by him. Nikolas didn’t murder Ava’s daughter, so he’s got that going for him. After everything that happened with Ryan, the bar is pretty low in the romance department. It won’t take a lot for Ava to fall for a better man. Nikolas may not exactly be a good one, but this could be the makings of another twisted romance if GH wants to take her revenge plot down a surprising path.

Whatever the case, Nik has better watch out once Ava realizes the extent of his deception. After Ava’s out of Shadybrook, she should be ready to unleash her wrath! General Hospital spoilers say some great drama’s brewing, so stay tuned. We’ll give you updates as other GH news comes in. Stick with the ABC soap and don’t forget to check CDL often for the latest General Hospital spoilers, updates and news.