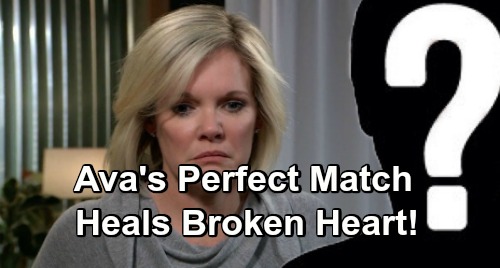 Now that she has the full picture, Ava will have to mourn Kiki Jerome’s (Hayley Erin) death all over again. The real Dr. Kevin Collins (Jon Lindstrom) is concerned about Ava’s well-being. She clearly can’t confide in Kevin, but she could still use some help. Unfortunately, Ava warned that opening her heart was a mistake she’d never make again. Is there any way she’ll change her mind?

Formal therapy probably won’t be something Ava’s interested in, so she’ll have to get support another way. Will Scott Baldwin (Kin Shriner) be the rock that gets Ava through this? He’s already been comforting Ava and will likely keep it up. General Hospital spoilers say Ava will seek out some tough love during the week of March 18-22. It’s possible she’ll turn to Scott for that.

After all, Scott’s been known to tell it like it is. Sugarcoating isn’t his forte, so that may be something Ava can appreciate right now. Their friendship could strengthen thanks to the crisis Ava has endured. Could GH be on the verge of making these two a couple? It’d be wise for Ava to stay single for a while, but perhaps she could give her heart to Scott eventually.

Scott just might be Ava’s best match. Dr. Griffin Munro (Matt Cohen) saw the good in Ava, but he was unwilling to accept the bad. No one is faultless, especially not Ava Jerome. She couldn’t live up to Griffin’s high standards, so that relationship was doomed from the start.

Ryan loved Ava in his own twisted way and embraced her dark side. Of course, that romance was doomed as well. The whole serial killer thing is obviously a deal-breaker! However, it wouldn’t have been the healthiest relationship anyway. Ava needs someone who can nurture the good in her without judging her for mistakes and terrible tendencies. Scott’s the ideal candidate to do that.

Kin Shriner has been supportive of a “Scava” pairing in the past. He’d like to see where Ava and Scott’s relationship could go. Many GH watchers are hopeful about this possibility as well. “I’m ready for Scott and Ava to finally get together,” said one General Hospital fan on Twitter. “Ava & Scott are perfect for each other,” said another excited viewer.

Would you like to see Ava fall for Scott once her heart’s healed enough to move on? General Hospital spoilers say Ava has a lot of grief to work through first, but you never know where her friendship with Scott might lead. We’ll give you updates as other GH news comes in. Stick with the ABC soap and don’t forget to check CDL often for the latest General Hospital spoilers, updates and news.