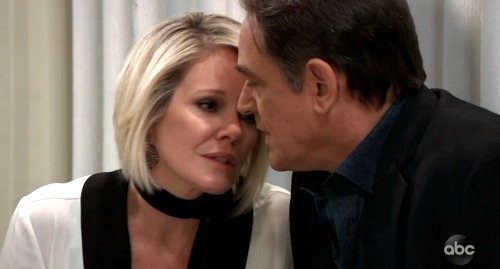 General Hospital (GH) spoilers tease that Ava Jerome (Maura West) may be getting in over her head. She managed to convince Kevin Collins (Jon Lindstrom), Laura Collins (Genie Francis), Mac Scorpio (John J. York), and Felicia Scorpio (Kristina Wagner) to help her lure Ryan Chamberlain (Jon Lindstrom) out of hiding and back to Port Charles. More than anything, she wants revenge on Ryan for killing her beloved daughter, Kiki Jerome (Hayley Erin).

But the plan involves some tricky details. Ava and Kevin have to pretend to be a new couple, allegedly drawn together in the wake of tragedy and circumstances. It’s a great plan for angering Ryan and luring him out of hiding, but it looks like it is presenting some confused feelings for Ava.

Of course, Ava was previously in love with Ryan, thinking he was Kevin. And now she’s faced with being a “couple” with the real Kevin. The two recently fake-smooched for a selfie that Ava posted on social media, and it apparently got to Ava, because a while later, she tried to plant a real kiss on Kevin.

Kevin put a stop to the whole thing, but we can’t help but wonder whether Ava is developing real feelings for the real Kevin. She probably has some transference of feelings from when she was blissfully happy with Ryan, thinking he was Kevin. After all, she was ready to marry “Kevin” before, so it stands to reason that she might be confused about her feelings now.

We also can’t help but wonder whether we might see Kevin develop some feelings for Ava. Sure, he loves Laura and values his relationship with her, but Laura has been out of Kevin’s orbit lately. She’s been out of the country with Curtis Ashford (Donnell Turner) trying to track down Ryan, and according to GH spoilers, she’ll soon team up with Robert Scorpio (Tristan Rogers) to do the same.

And it’s pretty clear that Robert has more than a fleeting interest in Laura. He recently asked her to go to the Nurses’ Ball with him, and it certainly looks like these two will be reconnecting as they put their sleuthing skills to use together. Since Laura will be distracted, that could pave the way for Kevin to explore his feelings for Ava.

But a bona fide Kevin/Ava pairing? Really? Well, stranger things have happened, and when two people have to pretend to be a couple in soap land, that tends to mean that they’ll eventually fall for each other, so you never know.

What do you think? Are we in for a Kevin/Ava pairing down the line? Stay tuned to the ABC soap and don’t forget to check CDL often for the latest General Hospital spoilers, updates, and news.