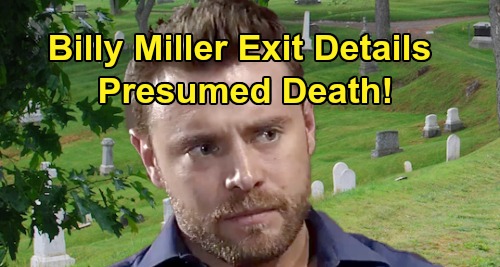 General Hospital (GH) spoilers reveal that more details are emerging about Billy Miller’s exit as Drew Cain. According to Soap Opera Digest, Miller’s final airdate will be Friday, August 23. No GH spoilers are available for that day just yet, but new ones have released for the days leading up to it. This info offers a potential glimpse of how Miller’s Drew may depart.

For starters, let’s talk about the latest developments General Hospital. Cameron Webber (William Lipton) has been kidnapped and sedated as part of Shiloh Archer’s (Coby Ryan Laughlin) evil plan. Shiloh was hoping Dr. Arthur Cabot (Time Winters) could use Jason Morgan (Steve Burton) as the memory subject, but he was forced to improvise in the end.

Now Franco Baldwin (Roger Howarth) has entered the mix and seems poised to get Drew’s memories instead. He’ll undoubtedly save Cameron from enduring the procedure, but that doesn’t mean Cam’s troubles are over. That’s because Shiloh will encounter another hurdle to his goal. He needs to know where his Afghanistan money is, but he may find himself in need of leverage again.

General Hospital spoilers say Drew and Curtis Ashford (Donnell Turner) will rush to stop Shiloh’s madness. They may break up this whole thing just after the memory deed is done. All the signs suggest Franco will wake up with Drew’s memories, and Curtis will feel to blame thanks to some mistake.

It looks like Cameron will be saved along with Franco, but another round of trouble’s brewing. Shiloh could always kidnap Cameron once again since he knows the teen’s valuable. Regardless, General Hospital spoilers say Shiloh will seek a trade on August 20. Will he demand Franco-Drew’s money information in exchange for Cameron’s safe return?

Of course, there’s no guarantee Shiloh would even keep his end of the bargain. General Hospital spoilers say the real Drew will rush to find Cameron the very next day. That puts us at August 21 – just two days before Miller’s set to leave. Sonny Corinthos (Maurice Benard) will also deal with a problem at his warehouse that day, so that likely gives us a location for Drew and Shiloh’s last stand.

Now let’s apply some logic. August 22 will probably bring the main drama of this showdown, where things could take an awful turn for Drew. That would leave August 23 to acknowledge a presumed death – like if Drew falls somewhere dark and ominous – or potentially set up a coma in the hospital.

Since that’s the end of the road for Miller and his final screen date, it doesn’t sound like Drew will be dead-dead with a body and everything. We probably would’ve seen him in more episodes like we saw Nathan West (Ryan Paevey) at his funeral. Presumed death would be a better option – or better yet, they could leave Drew comatose until a recast ultimately hits town.

However, we can’t rule out the idea that Shiloh will somehow pull a fast one and make Drew disappear with some nefarious agenda in mind. Whatever the case, General Hospital spoilers point to a dangerous exit strategy and presumed death! We’ll give you updates as other GH news comes in. Stay tuned to the ABC soap and don’t forget to check CDL often for the latest General Hospital spoilers, updates and news.