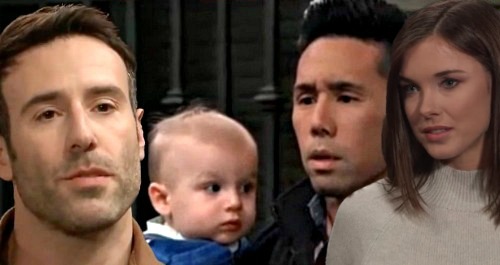 General Hospital (GH) spoilers reveal that Shiloh Archer (Coby Ryan McLaughlin) is exceptionally eager for Brad Cooper (Parry Shen) to join DoD activities with “Wiley Cooper-Jones” (Theo and Erik Olson). Why is Shiloh seemingly stuck on Brad and his adopted son? Does Shiloh suspect that “Wiley” could be his own child or is there another motive here?

Willow Tait (Katelyn MacMullen) pointed out that young minds are especially vulnerable at Dawn of Day. As kids like “Wiley” grow up under Shiloh’s influence, they’re brainwashed into believing the cult leader’s twisted way of thinking. It’s possible Shiloh just views “Wiley” as another child to target, but what if there’s more to the story?

Willow was pregnant when she left DoD, but she thinks she was able to keep that fact hidden from Shiloh. However, there’s a chance Willow’s morning sickness gave her away. Could Harmony Miller (Inga Cadranel) have noticed and filled Shiloh in after Willow took off? Is that why Shiloh and Harmony were so determined to track Willow down?

Whether that’s the case or not, Shiloh definitely has his eye on Brad and “Wiley.” Raising children in the cult means their usual practices become the norm. “Wiley” would never know to believe anything different. Shiloh’s anxious to scoop up as many moldable kids as he can, so that’s reason enough to lure “Wiley” in through Brad. If Shiloh suspects “Wiley” is his son, that’d just be an added motive.

General Hospital fans know Brad feels guilty over all the lies about Willow’s baby. If Shiloh’s truly in the dark, Brad will likely reveal the truth in his trust offering. Will he unknowingly clue Shiloh in on his dead child and the baby swap that followed? That could create quite a GH mess for Brad down the road.

After Brad’s confession, Shiloh might admit that he was the father of Willow’s baby. If Brad tells Shiloh that Michael Corinthos (Chad Duell) is the new baby’s real father, what would Shiloh do next? Shiloh would undoubtedly want to keep “Wiley” at Dawn of Day, so he might push Brad to change any paternity test results that might come about. He might want legal claims to this kid.

Shiloh could threaten to expose the switch if Brad doesn’t hand over custody or at least let him be very involved in “Wiley’s” upbringing at DoD. It’d be a surefire way to keep Brad deeply involved in the cult and unable to leave. Of course, Shiloh’s potential leverage could also put his life on the line. It might be the reason someone like Brad or Willow takes deadly action against the enemy!