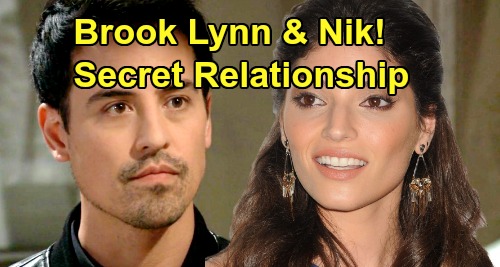 General Hospital (GH) spoilers tease that Nikolas Cassadine (Marcus Coloma) needs a new ally. Right now, his relationship with his partners Jasper “Jax” Jacks (Ingo Rademacher) and Hayden Barnes (Rebecca Budig) is on shaky ground. Nikolas enlisted Jax and Hayden’s help with the purposes of getting his hands the codicil to Mikkos Cassadine’s (John Colicos) will, but Nikolas has really pushed the envelope lately.

Hayden and especially Jax were horrified to see Nikolas show up in Port Charles, which is a huge risk in and of itself. Of course, Nikolas fired right back that Hayden and Jax made a colossal blunder when they managed to get Laura Collins (Genie Francis) mixed up in the hunt for the codicil. He felt that he needed to come and run the show directly from Port Charles.

But then Nikolas got himself mixed up in Cassandra Pierce’s (Jessica Tuck) escape from prison, and in doing so implicated Jax in the situation by using Jax’s company credit card to rent the getaway van. Now Jax is furious and is seriously considering cutting Nikolas loose and getting out of the whole codicil search, and Hayden probably won’t before behind when she learns what Nikolas has done.

Nikolas really needs someone else in his corner right now – someone who isn’t constantly on his case like Jax is, and who can help him achieve his goals. We can’t help but wonder whether the arrival of Brook Lynn Ashton (Amanda Setton) back onto the Port Charles scene has anything to do with the fact that Nikolas is back in town, too.

GH viewers may remember Brook Lynn, who was previously portrayed by Adrianne Leon and is the daughter of Ned Quartermaine (Wally Kurth) and Lois Cerullo (Rena Sofer). She and Nikolas (who was then portrayed by Tyler Christopher) had a relationship but ended on decent terms back in 2011, when viewers last saw Brook Lynn.

Brook Lynn has ostensibly been away from Port Charles pursuing her music career, but could it be possible that she’s been in contact with a presumed-dead Nikolas? It would certainly be an interesting development if Brook Lynn knew Nikolas was alive and had been helping him behind the scenes. He could be the reason she’s returning to Port Charles now.

Of course, it’s also possible that Brook Lynn’s re-emergence in Port Charles is simply a coincidence, but these two could certainly get together once Nikolas makes his presence known, or even before he lets everyone else know that he’s alive. One wonders if there will be chemistry between Marcus Coloma’s version of Nikolas and Amanda Setton’s version of Brook Lynn. It certainly makes for an interesting possibility!

Do you think that Nikolas and Brook Lynn have already been in contact with each other? Stay tuned to the ABC soap and don’t forget to check CDL often for the latest General Hospital spoilers, updates, and news.