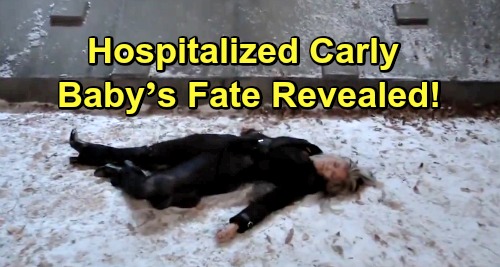 General Hospital (GH) spoilers tease that Jason Morgan (Steve Burton) will have his hands full. It’s not easy being GH’s Superman, but someone has to do it! Jason just showed up at the inn in hopes of saving Carly Corinthos (Laura Wright). He refuses to even consider the idea that Carly could already be dead.

Fortunately, Carly’s still hanging on in the snow somewhere. Ryan dumped her there alive, which was a surprising move on his part. The good news is Carly’s just waiting to be found by her bestie. The bad news is it’ll take Jason even longer to get to her. He’ll be busy trying to help Ava Jerome (Maura West).

General Hospital spoilers say Laura Webber (Genie Francis) will join Jason as they confront Ryan Chamberlain (Jon Lindstrom) on the footbridge. As Jason holds a gun on Ryan, Laura will shout an explanation about the twin swap. It looks like Ava will ultimately plunge into the water below with Ryan, so Jason may take that as his cue to dive in as well.

Jason can’t let Ava die – especially since he owes her his freedom from the Russian clinic. Plus, Ava may be the only one who can point Jason in Carly’s direction. That alone is motivation enough to save her.

It seems Ryan will survive and escape after his swim, which won’t be what Jason wants. However, he’ll be too focused on Carly to care. Jason will undoubtedly grill a frazzled Ava about Carly’s location.

Ryan mentioned leaving Carly about five miles east of the inn, so Ava may recall that info and give Jason updates. From that point on, Jason will have nothing but Carly on his mind. He’ll get into hero mode once again and rush to Carly’s side.

Hospitalized Carly Learns Her Baby’s Fate – Will There Still Be Another Little Corinthos?

It won’t be long until Carly is hospitalized and treated for her injuries. Of course, the big question everyone’s buzzing about is whether or not Carly’s baby will make it. This pregnancy was a total shock, but Carly likes the idea of a family addition now.

She’d be crushed to lose this little one, especially in such a traumatic way. It would only add to the suffering she’s endured thanks to Ryan.

Will Carly learn she had a miscarriage or will she get a miracle? General Hospital spoilers state that Carly will worry on March 20. That could indicate that her baby’s still alive to be concerned about. We’d say it’s more likely that Carly will worry about Sonny Corinthos (Maurice Benard), but we have to consider all possibilities.

If the baby indeed makes it through this, stress management will remain a problem for Carly. It sounds like Sonny will be missing by then, which will only add to her issues. Then again, Carly may lose the baby and have to cope without Sonny by her side. This is bound to be tough any way you slice it!