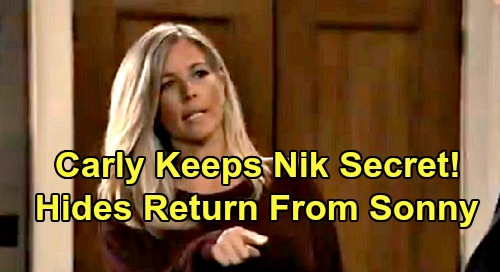 General Hospital (GH) spoilers tease that Jasper “Jax” Jacks (Ingo Rademacher) will soon have quite a mess on his hands. He’s been working on this codicil hunt with Hayden Barnes (Rebecca Budig), which led to Laura Webber (Genie Francis) and Curtis Ashford (Donnell Turner) joining the search. They’re hoping to prove Valentin Cassadine (James Patrick Stuart) isn’t the true heir to the Cassadine fortune, but a shocker’s about to change the game.

At the upcoming Halloween party, a masked man will reveal himself to Ava Jerome (Maura West). There’s a good chance that’ll be Nikolas Cassadine (last played by Nick Stabile) based on all the evidence. During the week of November 4-8, Jax and Hayden will grumble about their unwelcome surprise. They’ll probably complain about Nik resurfacing before he was supposed to!

Perhaps Nikolas has been getting impatient in hiding. He may have decided to get a little closer to the situation, but he won’t make a public comeback just yet.

General Hospital spoilers say Jax will scramble to stop Laura, so she’ll probably agree to keep quiet. If they’re going to pull off this plot against Valentin, they can’t let him know Nikolas is alive and well.

However, there’s at least one more secret-keeper who could be joining this storyline – and she’s an interesting choice. GH spoilers say Jax will call on Carly Corinthos (Laura Wright) in the week ahead. For whatever reason, Jax may end up sharing the Nikolas return news with her. Let’s look at some November sweeps info that may back that up.

In a recent issue of Soap Opera Digest, Co-Head Writer Chris Van Etten revealed some hints about what’s in store for Carly. “The revelations around Halloween will have an unexpected impact on yet another group of people, among them Sonny and Carly,” Van Etten said. “Carly will find herself in the possession of a loaded secret.”

Van Etten also pointed to a major decision for Carly, which would affect Sonny in a big way. Carly may choose to stay tight-lipped and not put Sonny in a tricky position with Spencer Cassadine (Nicolas Bechtel). She’ll also want to do Jax the favor he’s asking, so that’s one more reason to clam up about Nikolas Cassadine’s return.