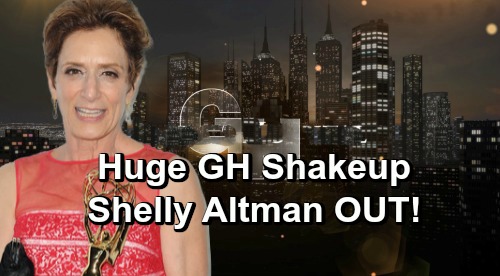 General Hospital (GH) spoilers tease that one of the show’s co-head writers may be on her way out. According to Daytime Confidential, Shelly Altman could be on the verge of retiring. Their sources suggest that Altman is planning to step away from General Hospital this fall and pass the pen to someone else within the GH writing staff.

Altman and Jean Passanante replaced Ron Carlivati in 2015, but GH fans may recall that 2017 brought Passanante’s retirement. Chris Van Etten stepped up as a co-head writer and currently writes the show with Altman. General Hospital buzz hints that if Altman retires as expected, one of GH’s breakdown writers will be promoted to take her place.

Dan O’Connor is the name that’s being tossed around as Etten’s co-head writer, and he’s got some solid soap experience to back him up. In addition to writing for General Hospital since 2013, O’Connor also wrote at One Life to Live from 2007-2008. It sounds like the show would be in good hands.

As for Altman’s potential departure, GH viewers were quick to offer their opinions. On Twitter, many fans expressed excitement over the change and called for even more shakeups. Some want Van Etten as well Executive Producer Frank Valentini out, too. Others aren’t hung up on specifics as long as the show improves and focuses on better storylines.

“It is time to bring my long time fave soap back to it’s glory days,” one General Hospital viewer said. “Way too much talent on this cast to let it go to waste. Rework some stories, send off some unneeded characters and use the vets!” Another GH fan insisted, “Frankly, I don’t care who is writing the freaking show! I just need someone in there who’ll finally listen to the fans…”

Altman’s retirement isn’t confirmed, but things certainly seem to be leaning in that direction. If this news is true, a writing revamp might be just what GH needs. It would probably help just to wrap up the Dawn of Day drama and give Michael Corinthos (Chad Duell) his baby back. Fans seem particularly riled up about those two issues.