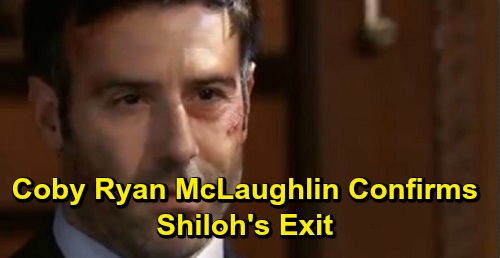 General Hospital (GH) spoilers tease that a major departure’s coming up. Many GH fans hate Shiloh Archer (Coby Ryan McLaughlin) with a passion – which is understandable considering all the horrible things he’s done. Plenty of viewers have been rooting for Shiloh’s exit, and they’re finally getting their wish. McLaughlin is out at the ABC soap, so Shiloh will be leaving Port Charles behind.

On a podcast called You May Have Seen, McLaughlin revealed the news in an interview with Brian Lafontaine. He explained that he signed a three-year contract with the show, but they decided to drop him early. That’s interesting since Shiloh has been such a despicable villain. There are some baddies you can redeem and some you just can’t. Shiloh seems to fall into the latter category.

Since Shiloh can’t go around causing constant destruction for three full years, it was wise for GH to write out the character. Of course, it’s a shame to lose a fantastic actor like McLaughlin. He played smug Shiloh perfectly. McLaughlin made viewers seethe just like she should when a bad guy’s on screen. You’d be hard-pressed to find an actor who could’ve portrayed the cult leader any better.

However, the character has definitely run out of steam at this point. It feels like most General Hospital watchers are ready to forget about Dawn of Day, Shiloh and everything connected to him. It’s time to move on to some new storylines, and that means Shiloh’s gotta go!

In a new Instagram story, McLaughlin wanted to give a shout-out to everyone who tuned in and joined his General Hospital journey. He called the experience “absolutely incredible” and insisted GH fans are “truly amazing.” McLaughlin admitted Shiloh was a “pretty despicable guy,” but he’s grateful he got to play the part and stir up a little trouble.

General Hospital spoilers say Shiloh’s escape will kick off his exit arc. There’ll be some wild twists and turns as Shiloh’s stint comes to an end, so you won’t want to miss a minute of the action. Will Shiloh face a deadly fate? That’s probably a safe bet since he’s been so evil. The most revolting villains often must pay with their lives!

Will you miss Shiloh or are you glad he’s exiting General Hospital? We’ll give you updates as other GH details emerge. Stay tuned to the ABC soap and don’t forget to check CDL often for the latest General Hospital spoilers, updates and news.