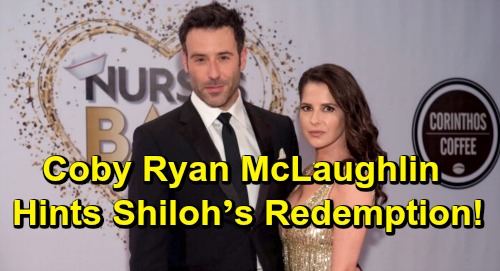 General Hospital (GH) spoilers tease that Shiloh Archer (Coby Ryan McLaughlin) will continue his creepy, controlling behavior. Sam McCall (Kelly Monaco) is working hard to bring Shiloh down, but her plot will be derailed in the week ahead. Some scary moments are looming, but Jason Morgan (Steve Burton) may save the day as usual. Even when things look bleak, Jason steps up and makes it happen.

However, Shiloh has proven untouchable so far. This guy consistently rapes and blackmails women while pretending to be a kind and loving individual. Shiloh gets away with it because of the leverage situation and the power he has over people in high places. General Hospital spoilers say Shiloh’s reach stretches further than GH has revealed. They’ll expose the true depth of Shiloh’s power down the road.

Of course, this baddie can’t keep winning indefinitely. There’ll come a time when doomsday arrives for Shiloh. When it does, what will it mean for Shiloh’s future in Port Charles? Will Shiloh be killed off or sent to prison? Could GH actually try to redeem him somehow?

General Hospital managed to redeem Franco Baldwin (Roger Howarth), so anything is possible. Nevertheless, many General Hospital fans feel like it’d be a waste of time to try redeeming Shiloh. It’s not like they can use the brain tumor excuse again, so Shiloh’s actions will have to stand. It’s going to be awfully hard for fans to ever get past what Shiloh’s done.

Even so, Coby Ryan McLaughlin seems to think there are some redeeming qualities to Shiloh. In an interview with Michael Fairman, McLaughlin was asked about the endgame for this storyline. He admitted that “nothing is set in stone” when it comes to soaps. McLaughlin suggested he isn’t sure about Shiloh’s outcome or how it might change depending on how things play out.

Naturally, McLaughlin still has his own personal feelings about how the story should go. “I ultimately know what I want…just because I ultimately think that the foundation of the whole thing is rooted deep within this individual’s character: his emotional makeup, and how he was treated,” McLaughlin said. He appears to be diving deep and analyzing Shiloh’s difficult past.

McLaughlin went on to suggest that Shiloh’s motives aren’t entirely vengeful. He seems to think Shiloh is a far more complex character. “There is a lot of revenge going on with this guy, but there is a lot more than that,” McLaughlin said. “He’s not just motivated by revenge.”

Based on McLaughlin’s comments, he’s hinting at a softer side of Shiloh. McLaughlin appears to want that as part of the endgame. It’s the idea of a very damaged soul resorting to negative coping skills and the bad tools he was given when he was younger.

Unfortunately, GH might’ve crossed too many lines to make that story work. Should they even try to explain or redeem Shiloh? Would you rather just see the character dead and written out for good?