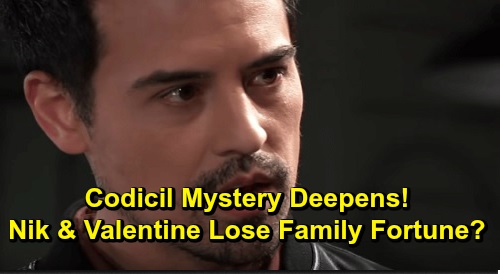 General Hospital (GH) spoilers tease that the race to find the codicil to Mikkos Cassadine’s (John Colicos) will is going to really heat up. As GH viewers know, Helena Cassadine (Constance Towers) allegedly hid the codicil, which names the rightful heir of the Cassadine fortune. The exact location of the codicil – which is presumably somewhere on Spoon Island – is supposedly hidden in the portrait of Helena that is now been put in storage somewhere by Ava Jerome (Maura West).

But now Nina Reeves (Cynthia Watros) has become privy to Nikolas’ existence, thanks to Ava. Nina’s now very likely going to get involved in the search for the codicil, and since she’s teaming up with Ava, she’s going to be one step ahead of the Cassadine men, whom she’d love to bring down at this point. It will be interesting to see what her teaming with Ava will bring, and just how she’ll go about locating the codicil without Valentin or Nikolas being the wiser.

Of course, all of this drama between Valentin and Nikolas and their respective searches for the codicil kind of assumes that the codicil is going to name someone other than Valentin as the rightful heir, and that it’s going to be Nikolas. But what if that’s not the case? Helena was a devious person, and whom that codicil names as the heir to the Cassadine fortune is anyone’s guess at this point.

There are, of course, some presumed-dead Cassadines who could be named. Stefan Cassadine (Stephen Nichols) is one option, or even Stavros Cassadine (Robert Kelker-Kelly). They both seemed to be dead, but you never know who might be alive out there and lodging a comeback.

Then again, it’s always possible that we’ll see a drastic change in the order of all things Cassadine. What if another heir were to be named, such as Alexis Davis (Nancy Lee Grahn), putting an end to the reign of male heirs to the Cassadine fortune?

That would be sure to shake things up. Of course, if Nina and Ava find the codicil first, then who’s to say that they won’t tamper with it, or even produce a false document naming neither Valentin nor Nikolas the rightful heir? Given how much Nina seems to want to get back at the Cassadine men, and how angry Nina is going to be once she figures out that Nikolas tormented her and caused her to commit herself to Shadybrook, they just might have revenge on their minds.

It will be interesting to see what happens here, but we suspect that the involvement of Nina and Ava in this storyline will bring some big changes and twists that neither Valentin nor Nikolas ever suspected. Who do you think will end up with the Cassadine fortune? Stay tuned to the ABC soap and don’t forget to check CDL often for the latest General Hospital spoilers, updates, and news.