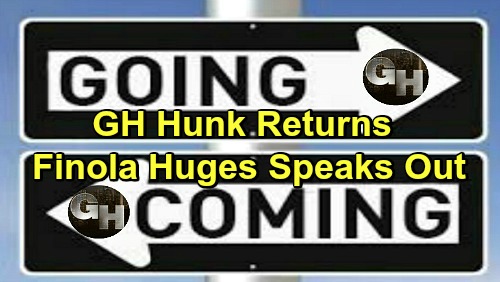 General Hospital (GH) spoilers reveal that there’s some comings and goings news to pass along. For starters, let’s talk about a major return. We’ve been hearing a lot about Alex Devane Marick (Finola Hughes) lately. Anna Devane (Finola Hughes) knows her sister could hold the key to unlocking her memory confusion. She needs Alex’s help if she wants to know the truth about her past.

That’s why Alex will head back to Port Charles this week, March 18-22, and give Finola Hughes a little extra work to do. In an interview with Soap Opera Digest, Hughes talked about the challenges of a dual role. She pointed out that it was even harder during this stint since Alex is blind when she first returns.

“This time, I had the added technical trickery of one of the characters that I portray having lost her sight. I just tried to do the best I could,” Hughes said. Of course, Hughes is being far too modest. She’s a powerhouse performer who always shines as Anna, but it’s especially fun to see her show off a different side through Alex. GH fans will definitely look forward to these exciting scenes.

Hughes also offered a few story hints that tied in with the memory drama. Alex will get the surgery to cure her blindness, but she won’t be quite as cooperative as Anna would like. She’ll share a memory that’s not actually Anna’s, but that obviously won’t be the only one.

When Anna turns her twin over to the WSB, Alex will blurt out something surprising. “Alex is defeated, so she plays her last card right as she leaves,” Hughes teased. “And that’s the card that gets under Anna’s skin.” Hughes mentioned that Alex provides “a little clue,” but Anna is still left wondering what’s real and what’s not. She can’t trust her sister, especially when spite’s involved.

Still, this should be the first seed about Peter August (Wes Ramsey) not being Anna’s son. General Hospital spoilers say Alex actually gave birth to Peter, but GH will save that shocker for later. In the meantime, another familiar face will hit PC. Amy Driscoll (Risa Dorken) recently popped up for scenes after a long absence and now it’s her brother’s turn to make a comeback.

Chet Driscoll (Chris Van Etten) will appear onscreen again this week, and it looks like he may interact with Maxie Jones (Kirsten Storms). Dominic Zamprogna (Dante Falconeri) will also continue his latest run, which just kicked off on Friday. General Hospital spoilers say some great material’s on the way, so don’t miss all the action.