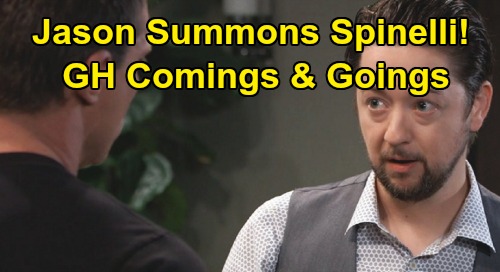 General Hospital (GH) spoilers reveal that we’ve got some comings and goings news to pass along. For starters, let’s talk about Wyatt Hoover (Patrick J. Gibbons Jr.). He recently popped back up with fears about his tonsillectomy, but Peter August (Wes Ramsey) came through for Wyatt with a pep talk.

On Twitter, Gibbons revealed that he has another airdate coming up on September 14. Perhaps Wyatt will bump into Peter again and admit he was right. The kid may not think the tonsillectomy was so bad after all. Wyatt might thank Peter and talk about enjoying all the ice cream he was promised. Whatever the case, it looks like there’ll be one more Wyatt popup.

General Hospital fans might be interested to know that in their recent scenes together, Gibbons’ real-life mom played his TV mom. He sent out a tweet gushing over what a great job his mother did and thanked Executive Producer Frank Valentini for her opportunity. Gibbons’ mom didn’t have any acting experience before this small role, but she stayed cool under pressure and pulled off her part with ease.

Gibbons said, “Sooooooo proud today! My real life mom and TV mom became one today. Mom never acted a day in her life until today and boy did she do great! @valentinifrank you created a lifetime memory. My father is on cloud 9!!! #GH #OLTL”

In other GH news, some big returns are brewing. General Hospital spoilers say Damian Spinelli (Bradford Anderson) will ride to the rescue during the week of September 16-20. He’ll make a comeback in Port Charles at Jason Morgan’s (Steve Burton) request. This might have something to do with presumed dead Drew Cain (Billy Miller) and the mysterious connection to Andre Maddox’s (Anthony Montgomery) stabbing.

Jason knows the two incidents must be related, so he may hope Spinelli can figure out how. There’s surely some trail that Spinelli can follow. He probably won’t catch Peter August (Wes Ramsey) just yet, but he could end up on the right track.

The week of September 16-20 will also bring Cassandra Pierce (Jessica Tuck) back into the picture. She’ll surprise Laura Webber (Genie Francis) and Curtis (Donnell Turner) by holding them at gunpoint. Cassandra will later be arrested, but she’ll contact Valentin Cassadine (James Patrick Stuart) in hopes of wiggling out of trouble. Will Cassandra have leverage that makes Valentin a reluctant ally?

Regardless, Cassandra will turn Valentin’s world upside down. That’s it for comings and goings! We’ll give you updates as other GH details emerge. Stay tuned to the ABC soap and don’t forget to check CDL often for the latest General Hospital spoilers, updates and news.

Sooooooo proud today! My real life mom and TV mom became one today. Mom never acted a day in her life until today and boy did she do great! @valentinifrank you created a lifetime memory. My father is on cloud 9!!! #GH #OLTL pic.twitter.com/sc9pDv2c1Y