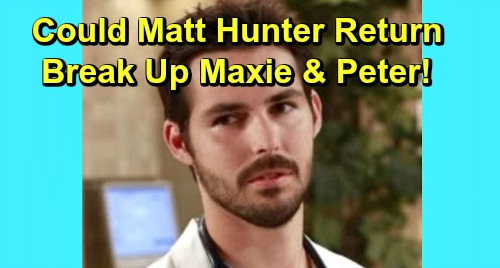 General Hospital (GH) spoilers examine a love relationship in Port Charles that is developing despite a noticeable lack of chemistry between the principals, according to many loyal fans. General Hospital’s Maxie West (Kirsten Storms) is currently in a relationship with Peter August (Wes Ramsey) but Maxie’s former husband Matt Hunter (Jason Cook) could change all that when he is released from prison.

Matt And Maxie Have Great Chemistry

Kirsten and Jason have always had amazing chemistry and it is evident on screen, they have proven this not only on GH but on Days of Our Lives as well. Matt and Maxie had a great fan base because of their previous pairing as well. Fans were very upset when Matt went to jail and have often wished for his return. Could their wait have finally paid off?

Some fans hate that Heinrik Faison (Wes Ramsey has been paired with Maxie. Fans hold Heinrik/Peter responsible for Nathan West’s (Ryan Paevey) death and want him no when near Maxie after all he is Nathan’s half brother and lured Faison to town. Peter also held Jason Morgan (Steve Burton) in a Russian clinic for five years. Jason fans aren’t likely to forget this.

Without Matt’s brother Patrick Drake (ex-Jason Thompson) and Griffin Monroe (ex Matt Cohen) General Hospital is in dire need of a brain surgeon and Matt would definitely fit the bill. Matt is almost as good as Patrick and their dad, Noah Drake (Rick Springfield). Matt would be a great asset to General Hospital‘s staff and most people know him as a great surgeon already.

If We can’t Have Spixie

Some Maxie fans still want Spixie (Spinelli and Maxie). Damien Spinelli (Bradford Anderson) fans, have held out hoped for a reunion win them and their daughter but that doesn’t seem likely at this point. In some Maxie fans minds, if we can’t have Spixie then bring back Matt, he has been Maxie’s next best pairing and we want more.

Jason Cook has been out of daytime for some time now to concentrate on other projects but maybe he would return to General Hospital. Jason knows that fans would welcome him back with open arms if given the chance and cannot wait for his return.

Fans want love in their afternoon and Matt and Maxie certainly bring that. Kirsten and Jason’s onscreen chemistry has always been on fire. Fans would welcome this pairing with open arms if given the chance. Hopefully, Matt will be strolling the halls of General Hospital soon with Maxie not far behind.