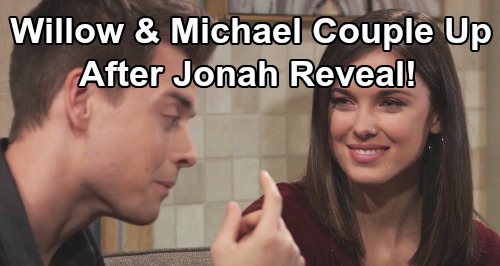 General Hospital (GH) spoilers tease that it’s time to start thinking about the aftermath of the Jonah Corinthos reveal. That shocker isn’t coming out just yet, but we’re definitely inching closer. GH fans are eager to see Michael Corinthos (Chad Duell) reunited with his son. It’ll be tough to see Lucas Jones (Ryan Carnes) so heartbroken, but Michael deserves the opportunity to raise his boy.

However, it’ll be interesting to see how Michael’s life changes following this revelation. By the time Jonah was born, Michael was ready to be a father. The whole point of taking Nelle Benson (Chloe Lanier) down with Harrison Chase’s (Josh Swickard) help was to protect his family – including his unborn child.

Now Michael has bonded with “Wiley Cooper-Jones,” the kid he believes to be his godson. Michael already feels a strong bond with “Wiley” and loves spending time with him. The transition from godfather to actual father should be a pretty smooth one on his end.

Will Sasha Gilmore’s Lies Be Exposed Before The Baby Reveal?

Of course, Michael isn’t the only one involved here. What about his hot romance with Sasha Gilmore (Sofia Mattsson)? Michael recently postponed their trip to Puerto Rico so they could attend “Wiley’s” first birthday party. Sasha seemed OK with being Michael’s plus one, but what happens after Michael’s in full-blown daddy mode? The adjustment may not be as easy for Sasha.

It’s possible Sasha’s lies will be exposed before “Wiley” is revealed as Jonah, which might result in her getting dumped. Sasha wouldn’t be in the picture in that case, but there’s also a chance GH will drag her story on longer than the Wiley-Jonah swap plot.

Will the addition of a kid bring distance for Sasha and Michael? It’s easy to see Michael pulling away as he tries to balance work and father duties.

Michael Corinthos’ Heart Will Go Out To A Mourning Willow Tait

Michael can hire nannies, but he’ll probably want to do most of the work himself. He’s missed out on so much of Jonah’s young life already. Sasha may get pushed aside, even if Michael doesn’t really mean to. He won’t be able to have sex all day like Sasha recently implied they’d been doing. General Hospital spoilers say Michael will have real responsibilities. There’ll be a child depending on him.

Naturally, Michael’s heart will go out to Willow Tait (Katelyn MacMullen) as she mourns her loss. She fully believes “Wiley” is her baby, so she’ll be devastated when she learns that’s not true. Michael will likely let Willow spend time with Jonah anyway and hope it somehow eases her pain. This could bring them closer as Willow starts sliding into a motherly role.

Sasha and Michael’s honeymoon period is in full swing. What will Lucy Coe have to think about Nina’s daughter planting roots in Port Charles?
A tense, new #GH starts RIGHT NOW on ABC! @SofiaMattsson1 pic.twitter.com/2FYhs7FeuX