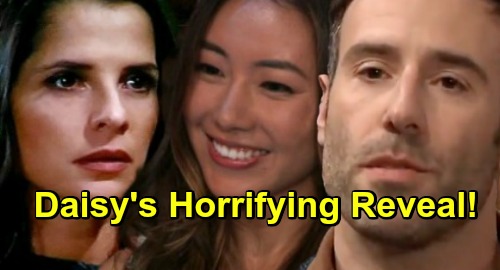 General Hospital (GH) spoilers tease that the walls will close in on Sam McCall (Kelly Monaco). She’s planted herself firmly in Shiloh Archer’s (Coby Ryan McLaughlin) circle with two goals in mind. Sam wants to save Kristina Corinthos-Davis (Lexi Ainsworth) from this Dawn of Day nightmare and bring Shiloh down for good.

Since Jason Morgan (Steve Burton) kidnapped Kristina, Sam can at least trust that her sister’s safe for now. However, she’ll soon realize just how difficult it is to defeat Shiloh and his sneaky tactics. General Hospital spoilers say Sam will have a chat with Daisy Kwan (Kelsey Wang) during the week of April 15-19. She’ll casually fish for any info that might help with her takedown plans.

During this conversation, Daisy will mention the loyalty pledge that Shiloh expects from members of “The Trust.” She may not spill all the details, but Sam will gather enough to know that trouble’s brewing. GH fans can expect Sam to worry about what Kristina might’ve disclosed. She’ll realize Shiloh could use whatever she provided as ammo against Kristina and their family.

General Hospital spoilers say Sam will play it cool with Shiloh and hope she can learn more. She may do some digging at the community house and find that transcript. Kristina’s trust offering was all about Alexis Davis (Nancy Lee Grahn) murdering Keifer Bauer (Christian Alexander), so Sam may uncover that ammunition eventually.

Until then, Shiloh will put Sam’s own loyalty to the test. After he finds Brad Cooper (Parry Shen) with the DoD cup, Shiloh will try to get a grip on that situation. He’ll also suspect that Jason snatched Kristina, so he’ll confront Sam about how much she knows. Shiloh may even think back to the timing of Sam summoning him across town.

General Hospital spoilers say Sam will be in a tight spot, but she’ll remain calm. She’ll assure Shiloh that she doesn’t know what Jason might’ve been up to. After Shiloh pushes her to investigate, Sam will vow to find Kristina and bring her back to DoD.

Of course, Sam will also promise Jason and Sonny Corinthos (Maurice Benard) that she’ll protect Kristina no matter what. Her true loyalty will lie with her little sis and the team that’s banded together to help her. Nevertheless, Sam’s involvement with Dawn of Day is a ticking time bomb. Shiloh will have to discover what’s really up sooner or later, which could bring total disaster if Sam’s not careful.

General Hospital fans won’t want to miss the twists and turns ahead. We’ll give you updates as other GH news comes in. Stay tuned to the ABC soap and don’t forget to check CDL often for the latest General Hospital spoilers, updates and news.