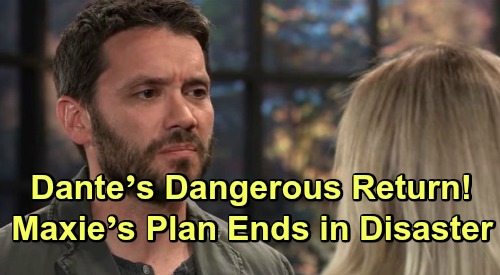 Dante asked for help from the WSB because he was afraid of hurting Lulu and his family. His brainwashing told him that he had to complete the mission. If Dante had stuck around, he might’ve pumped a bullet in Lulu or one of the kids. Seeking help to deprogram really was for the best.

However, this process undoubtedly takes time and plenty of effort on Dante’s part. He may not feel ready to come home. After all, he’d already be back if he felt he was up to it. Robert Scorpio (Tristan Rogers) was recently forced to retire from the bureau. Why is Robert not there watching over Dante? Is it possible that the WSB was behind the brainwashing and not Raj (Noshir Dalal)?

Robert could’ve been in in the way of the plan, which might’ve led to early retirement orders. The bureau may have felt Dante would be a better asset to the bureau as an assassin instead of an agent working against crime.

General Hospital fans know the WSB has plans to move Dante from one facility to another with no explanation why. What’s wrong with Dante’s current facility? It’s possible this is turning out to be a tougher deprogramming job than they expected. They may need to hand Dante off to other experts, but we can’t ignore a more sinister option. Maybe further programming is going on instead.

Will Peter August (Wes Ramsey) manage to interfere with the transfer and bring Dante home? If Dante returns to Port Charles in this state, he may not be able to fight his brainwashing alone. Dante didn’t feel it was safe to be around Lulu before. There’s a good chance that won’t have changed if he comes back before he’s ready.

Dante could be a danger to Lulu, Rocco Falconeri (O’Neill Monahan) and Charlotte Cassadine (Scarlett Fernandez). His other family members could find themselves in harm’s way, too. If Maxie pulls off the plan with Peter’s help, she might be setting up a violent GH disaster. Maxie could face major guilt if Lulu or someone else Dante loves is gravely injured.