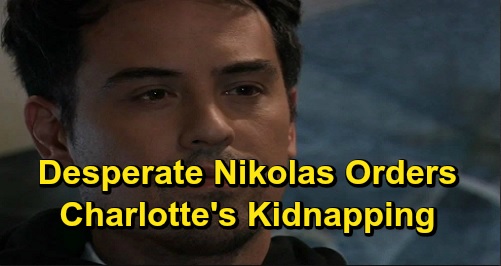 General Hospital (GH) spoilers tease that Jasper “Jax” Jacks (Ingo Rademacher) will want to handle things on his own. He’ll give Nikolas Cassadine (Marcus Coloma) a fierce warning, but it’s doubtful it’ll do any good. Since when does Nik listen to Jax’s orders? Never! Nikolas just lets Jax rant and then does whatever he wants anyway.

After Jax pushes Nik to steer clear of Ava Jerome’s (Maura West) auction and let him worry about acquiring the portrait, Nikolas may not trust that it’ll go his way. He might come up with a backup plan in case Jax’s efforts don’t pan out. Meanwhile, Jax will prepare to put up major money. He’ll plan to spend whatever it takes to make sure he walks out of that gallery with the painting.

However, Jax will get pulled out of the auction by Nina Reeves (Cynthia Watros), which is interesting. As part of the plan with Ava, Nina may want to make sure Valentin Cassadine (James Patrick Stuart) has the highest bid. Valentin will still go up against Laura Webber (Genie Francis), but she won’t be able to outbid him in the end.

General Hospital spoilers say Valentin’s victory celebration will be short-lived. There’ll be some sort of crisis over a loved one that leaves him reeling. That’ll likely be Charlotte Cassadine (Scarlett Fernandez), especially since Lulu Spencer (Emme Rylan) will feel powerless during the same timeframe.

As for Ava, she’ll be ready for an ambush. It certainly sounds like she’ll be expecting Nikolas after Valentin leaves without the portrait. He may tell Ava that he has to go deal with Charlotte and will return to pick up his prized possession in the morning.

Of course, we have to wonder if this sudden crisis is occurring because of Nikolas. He’s grown closer to Charlotte as her “secret bodyguard,” so he could easily convince her that her papa wants her to come with him. Nik may pull Charlotte away from babysitter Liesl Obrecht (Kathleen Gati) since Nina will confront her later.

So let’s put this whole scenario together and speculate on how it will go. Valentin leaves the portrait behind while he deals with Charlotte, who Nik potentially kidnaps from Liesl and stashes somewhere. Nina blasts negligent Liesl while Ava’s waiting to confront Nik, who wants to steal the portrait during the chaos. There’s no guarantee that’s how it’ll all play out, but it sounds pretty reasonable.