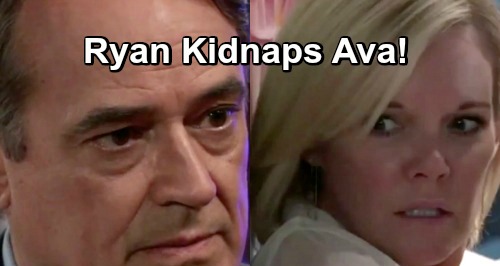 General Hospital (GH) spoilers tease that Ava Jerome (Maura West) will find herself in more danger than ever. Ryan Chamberlain (Jon Lindstrom) is quickly killing and wounding his way into a corner. He can only do so much damage before his plan falls apart. The cops are already getting closer to Ryan’s big secret. Jordan Ashford’s (Briana Nicole Henry) license clue is obviously a real threat.

Of course, Ryan believes he’s in control of the situation. Whenever someone becomes a problem, he just gets rid of them. Mary Pat Ingles (Patricia Bethune) and Peyton Mills (John Patrick Jordan) both could’ve blown Ryan’s plan.

As for Kiki Jerome (Haley Erin), Ryan was just trying to please his favorite “goddess.” Those murders are behind him, but it’s an almost murder that’ll really trip Ryan up.

General Hospital spoilers suggest that Ryan’s attack on Lulu Falconeri (Emme Rylan) will force a change of plans. He might try to get in Lulu’s room at GH and finish the job, but there’ll undoubtedly be guards posted outside her door. Between the police and Sonny Corinthos’ (Maurice Benard) security team, the place may be a fortress.

What’s Ryan going to do? If Lulu wakes up from the coma she’ll probably be in and blabs, the jig may be up. Ryan won’t want this nosy blonde blowing everything he’s worked so hard to achieve. He doesn’t want his crime spree to end, but he can let that go if he has to. It’s Ava that he can’t let go of!

Ava has replaced Felicia Scorpio (Kristina Wagner) as this murderer’s top obsession. Ryan’s crazy about her, so he has no intention of giving Ava up. He’ll likely bring up the whole running away together idea again. Ryan will pressure Ava to come with him and live the most wonderful life possible.

However, Ava may put up a fight or simply discover Ryan’s secret before they jet off. Either way, Ryan might take drastic action. He won’t want to leave Port Charles without Ava by his side, so could be resort to kidnapping? That seems like a good possibility.

Ava could end up needing a hero to come along and save her. Then again, Ava’s a strong and resourceful woman. She’ll also have a grieving mother’s vengeful wrath working for her. Ava may land in a kill or be killed situation.

After she discovers Ryan is the one who murdered Kiki, you can bet Ava will have no qualms about taking him out. It’s just a matter of whether Ava will have the chance.

General Hospital spoilers say Ryan’s dream woman could actually be his worst nightmare! Will Ryan kidnap Ava? Will she catch him off guard by turning the tables? Will Ava murder Ryan and put an end to all this?