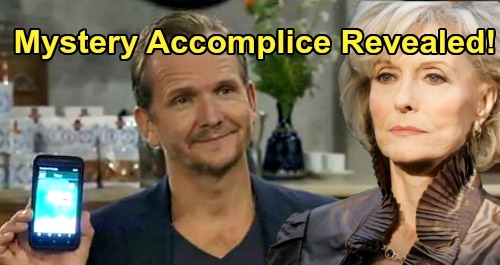 General Hospital (GH) spoilers reveal that Helena Cassadine (Constance Towers) has a mysterious accomplice, so it’s time to start pondering his identity. Could the mystery man involved in Drew Cain’s (Billy Miller) purchase have been Jerry Jacks (Sebastian Roche)? If so, this exciting twist could lead to plenty of drama!

In a flashback, David Henry Archer aka Shiloh (Coby Ryan McLaughlin) recalled seeing a tall white man with nicely polished shoes. This man approached Helena as pre-2012 Drew (Steve Burton) remained unconscious on the ground. After taking Helena’s money for kidnapping Drew and handing him over, “Hank” remained just around the corner and watched Helena’s next conversation.

Shiloh apparently learned this man’s name through eavesdropping, so he’s got a secret to spill. He tried to convince Franco Baldwin (Roger Howarth) to accept a trade: the name in exchange for the location of the hidden money. Charles “Tex” Owens filled Drew in on this info, so Shiloh’s eager to pry it out of Franco now.

However, Franco gave that offer a hard pass. It looks like he’ll continue to resist Shiloh’s efforts, so Shiloh may have to form a backup strategy. Regardless, the identity of Helena’s mysterious partner in crime will be exposed eventually. Let’s consider why this man could be Jerry Jacks.

Helena gushed over how glad she was to have this mystery guy in her corner. She talked about how handsome he was, and he appeared to be pretty tall. Cesar Faison (Anders Hove) doesn’t seem like the right fit in terms of height. Besides, GH viewers already know Cesar was heavily involved in the project, so that wouldn’t be some big revelation.

Dr. Andre Maddox (Anthony Montgomery) doesn’t work either since this man’s hands were that of a white man. It certainly wasn’t Valentin Cassadine (James Patrick Stuart) or Nikolas Cassadine (Tyler Christopher), so Jerry makes the most sense. He’s a handsome white man that Helena could reasonably admire and praise.

Jerry’s brother, Jasper “Jax” Jacks (Ingo Rademacher), would also fit the description requirements. Of course, General Hospital fans don’t even want to imagine that Jax could have been involved in a mess like this. Peter August (Wes Ramsey) is another option, but it’s doubtful Helena would’ve been that bashful over him. It also doesn’t seem like Peter would be part of the kidnapping portion of this story.

Jerry is the ideal associate here. He was involved in the clinic where Robin Scorpio-Drake (Kimberly McCullough) found who she believed to be Jason Morgan (Steve Burton) in stasis. Robin was determined to bring him back to life and Port Charles. She had no reason to believe it wasn’t Jason since she didn’t know he had a twin.

As for the flashback mystery, Jerry was one of the few GH bad guys ruthless enough to team up with Helena and carry out a plan this devious. Do you think Jerry Jacks was Helena’s accomplice? If he was, perhaps General Hospital spoilers will point to a comeback soon! We’ll give you updates as other GH news comes in. Stay tuned to the ABC soap and don’t forget to check CDL often for the latest General Hospital spoilers, updates and news.