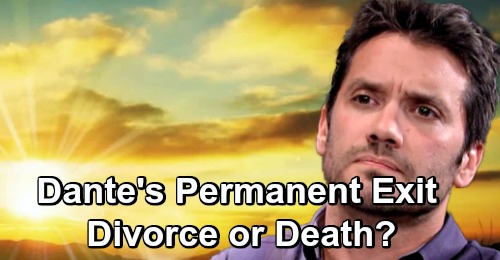 General Hospital (GH) spoilers tease that Dominic Zamprogna will reprise the role of Dante Falconeri, but he won’t be around permanently. There’s no word yet on the official length of Dante’s stint, but it’s safe to say he’s back for closure. GH couldn’t just leave Dante off on his risky mission forever. Lulu Falconeri (Emme Rylan) needs answers and a chance to move on – one way or another.

For fans hoping Dante might change his mind and return for good, we’ve got some news that suggests he won’t. Since Zamprogna’s departure, he’s been picking up intriguing projects. He was featured as Estuardo in a British-Canadian drama series called Tin Star, but now a gripping short film is in the works.

Zamprogna has scored the lead role in To the Moon and Back, a drama short that’s set to be completed this summer. It’ll start making the festival rounds after that, so this is certainly exciting for Zamprogna. He’s playing a character named Robert Westfield, who goes through a tough ordeal and has to rely on his family for support.

Robert faces crushing grief after the loss of his mother, so his wife and daughter step up to help. To add to Robert’s pain, he’s responsible for the eulogy at his mom’s funeral. Robert undergoes a crisis of reflection, growth and hopefully healing. It sounds like the kind of flick you’ll need tissues for, so be prepared if you check it out!

To the Moon and Back’s writer and director has an interesting GH connection as well. Nate Hapke is an independent filmmaker who’s eager to share this story with the world, but he’s also a production associate on General Hospital. That laid the groundwork for Zamprogna to work with Hapke on this new film.

As for what’s next in Port Charles, Sonny Corinthos (Maurice Benard) will fight to bring his son home. Of course, there are plenty of ways that rescue effort could go wrong! Whether Dante makes it back to PC or not, this seems to be a more permanent exit story. Will Lulu divorce Dante or have to suffer through his horrible death instead?

Zamprogna seems content to find work elsewhere, which means things are looking great beyond his upcoming stint. Still, General Hospital spoilers say the excitement will rev up, so don’t miss this hot plot’s twists and turns. We’ll give you updates as other GH details emerge. Stay tuned to the ABC soap and don’t forget to check CDL often for the latest General Hospital spoilers, updates and news.