General Hospital Spoilers: Double Drew Heartbreak for Monica – Must Accept Real Drew Is Gone as Franco Gets His Life Back 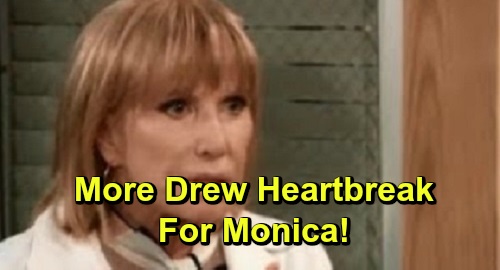 Monica knew Drew and had a relationship with him. She thought Drew was Jason Morgan (Steve Burton) for two years, so they naturally formed a bond. Even after the truth about Jason came out, Monica’s bond with Drew remained intact. Now Drew’s presumed dead, and Monica’s clinging to Franco and his claim to be Drew. Isn’t that disrespectful to the man she claimed as her son?

Monica asked to adopt Drew after his true identity was revealed. She also knows Franco is a former serial killer. Does Franco’s memory transfer change the fact that he tortured Jason and Sam McCall (Kelly Monaco)? It’s odd for Monica to treat him like Drew when the guy in front of her is so clearly Franco. You’d think it’d be harder for Monica to look Franco in the eyes and ignore this.

Plus, Franco has a wife and stepchildren. Monica realizes how much Elizabeth Baldwin (Rebecca Herbst) wants her husband back. Franco’s past is known to everyone just like his face is. No one’s going to believe Franco doesn’t have his memories locked inside him somewhere.

Franco may recall Drew’s past now, but they’re two different people who lived very different lives. There’s no reason for Monica to stand in the way of Franco recapturing who he is. Monica’s hindering Liz and Franco’s reunion for this fake version of Drew – one that’s all in Franco’s head.

Monica feels guilty because she didn’t get to raise Drew. She wants to know everything she can about Drew’s childhood, which Drew didn’t remember. Thanks to his new memories, Franco can give Monica what she’s missing from Drew’s past. However, Monica shouldn’t be supporting Franco for selfish reasons. She needs to consider the truth about who he really is and how this will affect the people closest to him.

General Hospital spoilers say Monica could be a huge hurdle for Scott Baldwin (Kin Shriner) as the court battle hits. Her testimony could mark a pivotal moment in the case. Part of Monica may be running from her grief, but that’s only going to backfire in the end.

One way or another, GH fans can expect Franco will become Franco again. When he does, Monica will realize she’s lost both the real Drew and the false version she was clinging to. General Hospital spoilers say she’s just setting herself up for double the Drew heartbreak!

It sounds like some exciting scenes are coming up. We’ll give you updates as other GH news emerges. Stay tuned to the ABC soap and don’t forget to check CDL often for the latest General Hospital spoilers, updates and news.