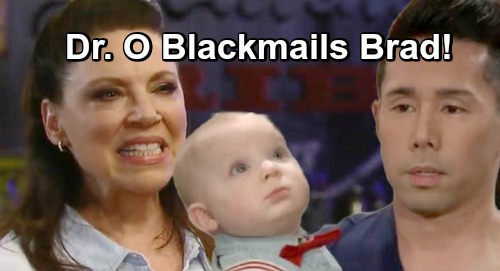 General Hospital (GH) spoilers tease that Liesl Obrecht (Kathleen Gati) will continue to wonder about who might have pushed her overboard during Franco Baldwin (Roger Howarth) and Elizabeth Baldwin’s (Rebecca Herbst) wedding celebration on The Haunted Star. Liesl could easily have been killed, and that was clearly the intent of whoever pushed her.

Now that Elizabeth and Franco have discovered photographic evidence of the probable culprit’s pant leg and shoe, it seems pretty clear that the pusher was a man. That interested Dr. Obrecht, and it won’t be long before she puts two and two together and realizes that the culprit may be connected to one of the big secrets she’s currently keeping.

Liesl knows both secrets, and in the coming days it seems that she may launch her own little investigation about who may have pushed her. Liesl rather enjoys being in on secrets, since it gives her leverage over other people. She may wind up more motivated to keep her secrets than she is to see the person who pushed her come to official justice!

And that might explain a couple of ongoing GH spoilers. First off, General Hospital spoilers indicate that Liesl will wind up confronting Brad, and that likely means that she suspects he’s the one who pushed her overboard. As viewers know, Brad also seemed to be preparing to give Liesl some sort of drug at the hospital after her fall, which looked pretty bad…as if he was trying to finish the task he started on The Haunted Star.

At any rate, look for a heated confrontation between Liesl and Brad, and if Brad didn’t already have an ulcer, his run-in with Liesl might cause one, since Liesl can be pretty scary when she wants to be! We’ll see if Brad admits to being Liesl’s pusher, and what happens from there.

Other General Hospital spoilers say that Liesl will agree to keep quiet about something, and since there doesn’t seem to be any end to the baby swap story in sight right now, it looks like she and Brad may reach some sort of agreement, even if the agreement is really blackmail. But for her silence about Wiley’s true parentage, Liesl Obrecht will want something in return from Brad, and that could prove to be very interesting!

GH viewers will have to tune in during the coming weeks to see exactly what Liesl decides to do about Brad, or have Brad do for her going forward. What do you think Liesl’s next move will be? Stay tuned to the ABC soap and don’t forget to check CDL often for the latest General Hospital spoilers, updates, and news.