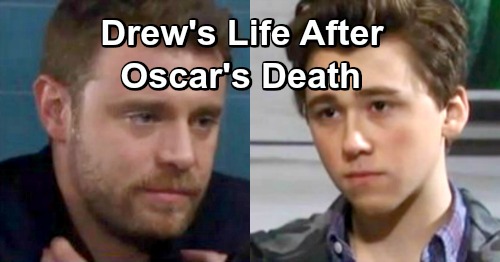 General Hospital (GH) spoilers tease that Drew Cain (Billy Miller) will try to be strong for his loved ones. Oscar Nero’s (Garren Stitt) clinical trial was a failure, so he’s fading fast. Dr. Terry Randolph (Cassandra James) will soon be able to estimate how many months Oscar has left. Obviously, it won’t be a lot.

Oscar will just have to try to cram all the joyful experiences he can into a short amount of time. Of course, Oscar is still a teenager and most teenagers like to hang out with their friends.

That could make this ordeal even tougher on Oscar’s parents. Dr. Kim Nero (Tamara Braun) and Drew won’t want to rob Oscar of any remaining moments with his girlfriend, Josslyn Jacks (Eden McCoy). The same goes for Oscar’s time with his pal, Cameron Webber (William Lipton).

Kim left Oscar out of the loop on his condition for quite some time and her motive was simple. She just wanted Oscar to be a normal kid for as long as possible. Kim undoubtedly still wants that for Oscar now.

However, she’ll feel like she’s drowning in grief before Oscar ever kicks the bucket. Kim will likely lean on Drew, but who will he lean on? There’s one person who will definitely express concern for him.

On the new GH episode Tuesday, January 15, Monica Quartermaine (Leslie Charleson) will have Drew’s terrible situation on her mind. She’ll worry about what Drew’s going through and wish she could help him somehow. A nice chat couldn’t hurt, but it won’t be enough. Drew hasn’t even known his son for all that long and he’s already losing him.

Unfortunately, Sam McCall (Kelly Monaco) may not be of much use to Drew. She would certainly be there for him if he wanted her to, but she’s busy with all this Shiloh Archer (Coby Ryan McLaughlin) drama. Drew won’t want to burden her as he sinks lower and lower.

What happens once Oscar’s time is finally up? You can bet it’ll take a while for Drew to process the loss and find a way to move on. Will grief bring Kim and Drew together? That’s one GH possibility to consider. It’s equally possible that the sorrow of all this will kill the spark. Kim may find that she now associates Drew with pain and sadness.

If Drew doesn’t end up with Kim, what’ll be next for him? General Hospital spoilers say he’ll need another storyline, so perhaps they’ll focus on the memory route. Since Oscar will be taking some exciting risks before his passing, his dying wish might be for Drew to take one, too. Oscar may think getting his memories back would be worth it. Drew deserves to know who he really is.

Drew could find love again as well. If he doesn’t find it with Kim, Margaux Dawson (Elizabeth Hendrickson) is an option. Even a reunion with Sam won’t be off the table by then. General Hospital spoilers say there’ll indeed be life in a post-death world. Drew will just have to process Oscar’s demise and try to let go.

It sounds like some great material’s in the works for Drew. We’ll give you updates as other GH news comes in. Stay tuned to the ABC soap and don’t forget to check CDL often for the latest General Hospital spoilers, updates and news.