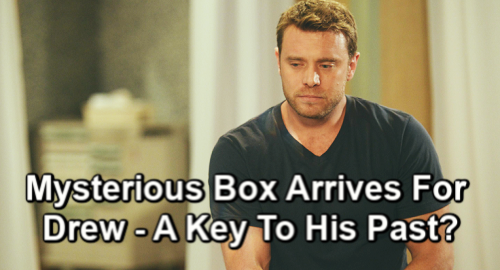 General Hospital (GH) spoilers tease that a shocker’s in store for Drew Cain (Billy Miller). On July 26, Drew will receive a strange gift. A mysterious package will arrive, so Drew will definitely be curious about the contents.

Since this is a mystery box, it doesn’t sound like it’ll be marked with a sender’s name. Drew will just have to open it up, see what’s inside and gather any clues from what he finds.

It’s possible the sender will include his or her name with whatever Drew gets. There’s no word on what Drew will see when he opens this box, but it just might kick off a new storyline. Now that Oscar Nero Quartermaine (Garren Stitt) is gone and Kim Nero (Tamara Braun) is finally getting the help she needs, Drew could use a hot plot to keep him occupied.

Drew Cain Has An Unknown History – Viewers Eager To Learn It

Of course, the first thing that comes to mind is exploring Drew’s past. He’s got an unknown history that GH is just sitting on. Many General Hospital viewers are eager to learn more about Drew.

He’s been stuck in limbo ever since the real Jason Morgan (Steve Burton) returned to town. Drew still has Jason’s memories, so we haven’t been able to get a grip on who Drew is as a person.

Maybe this mysterious package will contain a glimpse of Drew’s past. It’s possible somebody Drew knew years ago stumbled across something and decided he should have it.

Could An Enemy Be Sending Drew Cain A Cryptic Warning?

Although it probably wouldn’t jog Drew’s memory, he might be more motivated to learn the details of his history. Anything that brings burning will be useful to Drew and his journey.

Then again, it’s also possible an enemy will be behind this package. Someone might send it to Drew as a cryptic warning or something along those lines.

Shiloh Archer (Coby Ryan McLaughlin) had a connection to Drew once upon a time, so he could opt to mess with Drew a bit. This cult leader will ready to rattle some cages in the weeks ahead, so Drew may become a target.