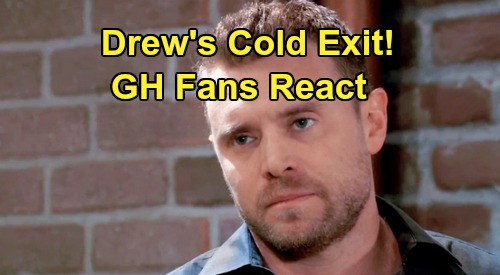 General Hospital (GH) spoilers reveal that Drew Cain’s (Billy Miller) exit has disappointed many fans. It makes sense that the show went with a presumed death scenario. Drew would never abandon Scout Cain (Ella Ramacieri), and a definitive demise would close the door on a return or recast. However, the current situation has made for a lackluster departure.

Miller was a well-liked performer, but GH seemingly didn’t care about giving him much of a sendoff. Of course, Drew has always been a mistreated character. Once General Hospital revealed Drew wasn’t Jason Morgan (Steve Burton), he was cast aside. It’s a shame that Drew never got a chance to explore his past; now Franco Baldwin (Roger Howarth) is essentially getting that story.

Drew got a grief arc after Oscar Nero Quartermaine’s (Garren Stitt) death, but even that wasn’t a major storyline. Kim Nero (Tamara Braun) got all the focus, so Drew was just a supporting player in that. It should come as no surprise that Drew’s being treated this way in death as well. Is it just us or is everyone acting a little too casual about Drew’s seemingly deadly fate?

You could argue that everybody’s still somewhat in shock. There’s even some denial going on in certain cases. Drew’s loved ones don’t want to believe this is the end – and it may not be depending on what GH has in mind down the road. Nevertheless, we have to deal with the here and now. As it stands for the characters at the moment, it’d be nice if they were showing a little more emotion.

Kim was upset about Drew’s demise, but she’s got another “Drew” there to lessen the blow. Maybe this memory-mapping story is part of the problem. Franco may not be the real version of Drew that’s been in town, but he’s a version of him nonetheless.

Some General Hospital viewers wanted to see bigger emotional reactions from Elizabeth Baldwin (Rebecca Herbst), Sam McCall (Kelly Monaco) and everyone else who should be reeling from the loss. On Twitter, fans have been slamming GH writers for not doing enough. After all, the actors can only work with what they’re given.

“Everyone seems surprisingly laid back about Drew dying,” said one General Hospital watcher. She added that “Drew’s death feels like someone turning in their paper at the last minute.” Another fan said, “I hope we get more meaningful reactions to Drew’s ‘death.’” One more viewer insisted, “Everyone’s reactions to this missing plane are …. bizarre.”

Let’s hope we’ll see true grief as reality sets in. Since Miller isn’t coming back anytime soon and there’s been no recast news, Drew’s friends and family will have to accept his fate for now. General Hospital spoilers say the story should shift to who’s responsible, and we know that’s Peter August (Wes Ramsey). Peter will inevitably face a shocking exposure, so stay tuned.

Were you disappointed by Billy Miller’s exit? Do you wish Drew’s loved ones would’ve had bigger responses to his presumed death? We’ll give you updates as other GH details emerge. Stick with ABC soap and don’t forget to check CDL often for the latest General Hospital spoilers, updates and news.