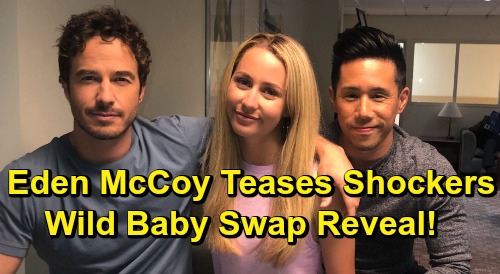 General Hospital (GH) spoilers tease that the baby swap drama is about to heat up. The big reveal is closer than ever, especially now that Shiloh Archer (Coby Ryan McLaughlin) knows he had a child with Willow Tait (Katelyn MacMullen). The pressure’s rising for several secret-keepers, but not everyone has the whole story. This is all building to some major revelations, which one ABC soap star hinted at in a recent tweet.

Eden McCoy (Josslyn Jacks) always enjoys posting photos with her GH family, so she put up a new one with Ryan Carnes (Lucas Jones) and Parry Shen (Brad Cooper). The caption said, “I know I’ve said this before, but buckle up people.” McCoy included a grimacing face emoji along with one to convey an SOS call. It’s clear that things are about to get chaotic in Port Charles, which will start with a huge comeback.

During the week of June 10-14, General Hospital spoilers say Nelle Benson (Chloe Lanier) will stir up trouble once again. She’ll get an unexpected visit, which may be Brad or someone she’d never met before. Regardless, Nelle will indeed make a new friend later. She’ll also make an epic escape, so it won’t be long until she’s on the loose in PC. The chance of a “Wiley” kidnapping could skyrocket!

It also looks like at least one person could find out about the baby swap soon – although she probably won’t get all the facts. General Hospital spoilers say Willow will get some stunning news next week. There’s no guarantee that ties in with her baby, but it’s possible Willow will learn Brad swapped her dead kid for another one.

Julian Jerome (William deVry) might share Brad’s half-true story about a random lady offering him her child. GH fans know Brad was indeed offered a baby, but the lady wasn’t so random! His old pal, Nelle, handed over Michael Corinthos’ (Chad Duell) son. Willow wouldn’t stay silent knew that part, but she might keep quiet about the swap with a stranger’s kid – someone who couldn’t care for “Wiley.”

If it comes down to a paternity test and Willow lying about sleeping with someone else to support the results, she might get on board. Protecting “Wiley” from Shiloh and keeping him with his family would be Willow’s focus. Of course, Brad’s altered story could get back to Lucas eventually and cause outrage. Little would Lucas know the whole truth is far worse.

Regardless, many twists and turns are looming in this hot plot. General Hospital spoilers say McCoy is right; GH viewers had better buckle up! Are you glad the big reveal is inching closer? Are you ready to see Michael reunited with Jonah? We’ll give you updates as other details emerge. Stay tuned to the ABC soap and don’t forget to check CDL often for the latest General Hospital spoilers, updates and news.