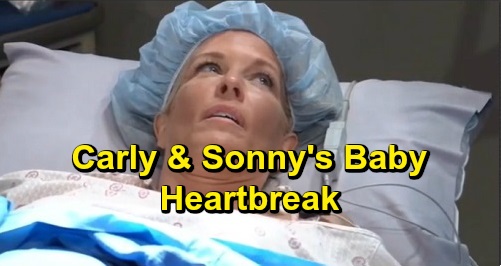 General Hospital (GH) spoilers tease that Carly Corinthos (Laura Wright) will worry about the fate of her baby. She had a C-section scheduled, but early labor has bumped up the timeline. This kid’s coming right now, so Carly and Sonny Corinthos (Maurice Benard) will just have to roll with it.

Of course, this certainly isn’t how they wanted things to be. Carly was hoping to be somewhat in control of the situation, but that’s just not possible now. A premature birth and emergency C-section raise the stakes even more – and they were already ridiculously high. GH fans know Carly and Sonny’s baby has spina bifida, but they can’t be sure of the severity until the child’s born and undergoes a test.

However, Carly’s doctor has to make sure Mom and Baby Corinthos survive this phase first. The rest of the family will rally in the waiting area as they hope for good news. In a new issue of Soap Opera Digest, General Hospital Co-Head Writers Dan O’Connor and Chris Van Etten previewed the shocking ordeal. It’s safe to say Carly, Sonny and all their loved ones will battle extreme fear.

“Sonny believes in his wife and he knows that she is going to pull through, but the moment he is by himself, he’ll reveal a sliver of vulnerability,” Van Etten said. “He’s a strong man, but he’s not without his own fears.” Perhaps Sonny will visit the chapel and send up a prayer for Carly. He’ll obviously want their baby to be OK as well, but he won’t know what he’d do without Carly by his side.

Thankfully, Carly will pull through, but what about the kiddo? “It will be a waiting game for the parents,” Van Etten admitted. “Even if the baby comes through the birth okay, it faces an immediate medical test – dare I say, crisis.” That statement doesn’t come right out and confirm the baby pulls through too, but it definitely implies it. After all, you can’t have a test and a crisis unless the child’s alive.

Unfortunately, there are no guarantees about the difficult road ahead. General Hospital spoilers point to some dark times for the Corinthos clan this fall. Will the severity of this child’s condition leave them struggling? Will Carly and Sonny’s baby ultimately die?

GH fans will see major drama as this storyline takes some heartbreaking twists and turns. We’ll give you updates as other details emerge. Stay tuned to the ABC soap and don’t forget to check CDL often for the latest General Hospital spoilers, updates and news.