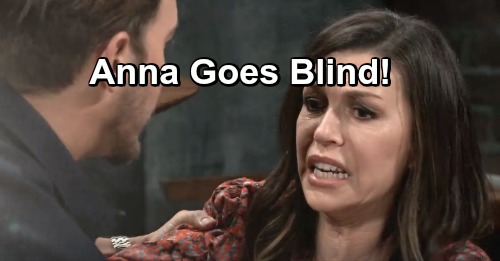 General Hospital (GH) spoilers tease that Anna Devane (Finola Hughes) will face an abrupt and shocking problem. Her world will suddenly go dark! Anna will go blind and struggle to understand what happened to her. Naturally, Dr. Hamilton Finn (Michael Easton) will be on the case right away. He’ll be determined to get to the bottom of this and restore Anna’s sight as soon as he can.

However, Finn will quickly realize this isn’t going to be easy. Anna’s ailment will be quite mysterious, so he’ll have trouble pinpointing the reason behind it. Without a cause, it’ll be tough to find a treatment. Of course, Finn isn’t a quitter when it comes to finding cures and helping the people he cares about. He’ll keep at it and eventually make some progress in his quest to give Anna her sight back.

General Hospital spoilers say Finn will have to do some negotiating in this storyline. He’ll seek out the assistance of someone else who battled Anna’s mysterious condition and make an offer. Finn will undoubtedly get the deal he’s looking for, but the fight won’t be over. It’ll still take some work to bring light and colors back to Anna’s life.

GH fans will see some interesting connections come out of all this. Anna’s hot plot will tie some unexpected characters together, so there’ll definitely be some surprises along the way. Of course, you can bet Robin Scorpio-Drake (Kimberly McCullough) will make an appearance before long. She wouldn’t leave her mom to suffer through this alone.

Peter August (Wes Ramsey) may grow closer to both Anna and Robin as this ordeal goes on. He’s always wanted a real family, so perhaps this is his big chance. Something good could come out of Anna’s difficult circumstances. Plus, General Hospital is bound to deliver a happy ending regarding Anna’s sight. They’re not just going to leave her blind, so Finn will inevitably come through for her.