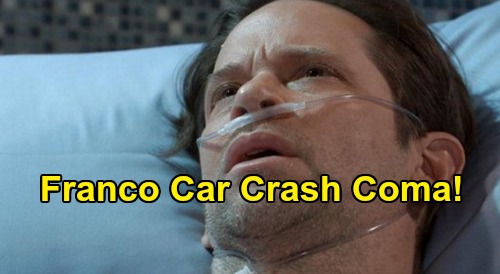 Franco didn’t get the truth out of Liesl, but he’s been introduced as a key player in the baby drama. With that in mind, let’s look at some other crucial General Hospital spoilers. Ava Jerome’s (Maura West) new psychic will decide to give Franco a stern warning. She’ll insist Franco shouldn’t take a drive, but he’ll brush off the psychic’s fears and take Liesl home anyway.

It looks like Franco will make it to his destination just fine, so he should be pleased that he ignored the psychic’s advice. Franco will go about his business, but he shouldn’t be so sure he’s in the clear. After all, there won’t be any kind of time limit on this warning. Franco will be taking a risk every time he gets behind the wheel.

Oscar Nero Quartermaine (Garren Stitt) also left Cameron Webber (William Lipton) his car, so there’s been way too much car talk lately. Anvils are dropping like crazy, which means Franco’s in trouble! Ava’s previous psychic, Sibley Gamble (Veronica Cartwright), told Franco that he wouldn’t be feeling like himself soon. That’s another big hint about the disaster that’s brewing for Franco.

General Hospital spoilers say total horror will hit for Franco during the week of August 5-9. Something will leave him deeply disturbed, but what might that something be? Could Franco learn Jonah is alive and was swapped with Wiley? Will he overhear Liesl and Brad Cooper (Parry Shen) arguing about the secret?

If Franco discovers “Wiley” is actually Michael Corinthos’ (Chad Duell) son, that would certainly leave him horrified. Let’s consider the puzzle pieces here. Franco has been warned not to drive and is about to discover a secret that could change everything. This is the prime setup for a soapy car crash – and a coma that prevents the truth from getting out!

General Hospital spoilers say Liz will lean on Hayden Barnes (Rebecca Budig) in the coming weeks. They’ll grow closer in the process, so it makes sense that Hayden will support Liz through Franco’s medical crisis. Liz may worry Franco’s never going to wake up. Of course, Franco will indeed pull through if this plays out, but will he remember his potential Jonah discovery when he awakens?

GH could keep this storyline going strong if Franco has some memory loss. Whatever the case, some great twists and turns are ahead. We’ll give you updates as other news comes in. Stay tuned to the ABC soap and don’t forget to check CDL often for the latest General Hospital spoilers, updates and news.