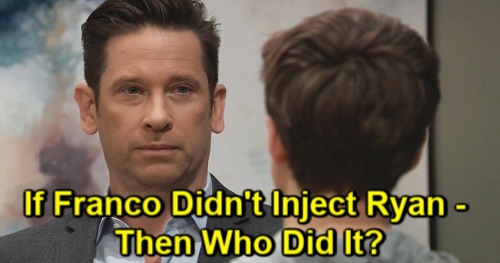 General Hospital (GH) spoilers tease that a mystery will unravel on the ABC soap. GH fans know someone wearing gloves was behind Ryan Chamberlain’s (Jon Lindstrom) injection, which caused a seizure. Some of those fans are eager to jump on the “Franco Baldwin (Roger Howarth) did it” bandwagon, but maybe they should hop back off.

After over five years of attempting to redeem this character, why would the writers have Franco commit a felony? As much as Franco haters would love it, Franco is just too easy to be the person responsible. We can understand why some viewers would draw that conclusion, but Franco’s explanation could be correct.

Cameron Webber (William Lipton) caught Franco taking off the gloves and got a reasonable response. Franco claimed he was cleaning up paint and used the gloves to keep the chemicals from eating away at his skin. Although most people wouldn’t need gloves to clean up paint, it’s certainly not out of the realm of possibility that Franco would use them.

Cameron Webber The Only Witness

Plus, why would Franco risk taking the gloves off in a hallway where anyone could see him? Someone who innocently cleaned up paint would do that; someone who just committed a felony and could get caught disposing of the evidence would not.

Cameron is already in trouble with the law and isn’t allowed to have any more slip-ups without going to a juvenile facility. It’d be weird for the writers to put Cameron in this position.

He was the only witness and would be in a tight spot if he hid the truth about a felony. Cameron seemed to buy Franco’s story, but the judge wouldn’t necessarily believe that. It could look like he was covering for his stepdad.

Was It A Case Of Misdirection?

That’s not the ideal story for Cameron, who’s still struggling to cope with Oscar Nero Quartermaine’s (Garren Stitt) death. Cam’s busy supporting Josslyn Jacks (Eden McCoy) as well, and General Hospital spoilers for the rest of the summer point to the typical teen drama, not heading back to the courtroom.

Franco has done a lot worse than causing a seizure. After all, the man is a serial killer. Franco is clearly capable of giving Ryan a injection to incapacitate him or even kill him, but why make it so obvious? Generally, the culprit is revealed later, and it’s supposed to be a shock. By making Franco look like the culprit so quickly, this whole thing screams red herring.

General Hospital fans like the element of surprise and usually expect to get it! Will GH deliver a truly stunning outcome? Was Franco’s incident a simple case of misdirection? We’ll give you updates as other GH news comes in. Stay tuned to the ABC soap and don’t forget to check CDL often for the latest General Hospital spoilers, updates and news.