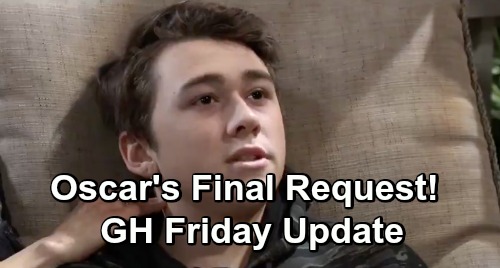 General Hospital (GH) spoilers for Friday, April 26, tease that Oscar Nero (Garren Stitt) will get a visit from Jason Morgan (Steve Burton). Drew Cain (Billy Miller) and Josslyn Jacks (Eden McCoy) will also be outside the Quartermaine mansion as Oscar continues to fade. When Oscar asks to speak with Jason alone, it’ll catch the rest of the gang off guard.

Nevertheless, Oscar’s wish will be granted, and he’ll hope Jason can grant a couple more. It seems one will be a favor for Jason to carry out. Afterward, Oscar will also push Jason and Drew to try being true brothers. If he can ease the tension between them before his death, he’ll feel like he’s accomplished something.

Oscar will undoubtedly get some promises as he looks to his family on Friday. He’ll have a job for Cameron Webber (William Lipton) to do, too. General Hospital spoilers say Oscar will count on Cam, so he’ll likely ask his friend to watch out for Josslyn once he’s gone. It’ll bring Oscar peace if he can lock in some support for his love.

Next, Avery Corinthos (Ava and Grace Scarola) will spend some time with Sonny Corinthos (Maurice Benard) and Carly Corinthos (Laura Wright). She’ll be adorable as usual, but the question she asks will leave Sonny surprised. Carly will urge Sonny to answer Avery, but he’ll chuckle as he tries to come up with one. Perhaps it’ll be baby-related and difficult to express to a kid Avery’s age.

However, Sonny will succeed in distracting Carly from her pregnancy concerns, which will be a win in his book. Elsewhere, Anna Devane (Finola Hughes) will gripe at Robert Scorpio (Tristan Rogers) for being too hard on Dr. Hamilton Finn (Michael Easton). She won’t get what Robert’s deal is, but she should really know by now that it’s his typical behavior.

Robert may be a little grumpy on the surface, but he cares about Anna and wants the best for her. He’ll probably make that clear and hope Anna lets this go. At GH, Michael Corinthos (Chad Duell) will check on a hospitalized Sasha Gilmore (Sofia Mattsson). She’ll joke around about being no good for Michael and suggest that she’s caused him some trouble.

It sounds like Sasha might pass out and give Michael a bit of a scare, but she’s going to be fine. Calming Nina Reeves (Michelle Stafford) down may be the biggest challenge! In the meantime, Nina will give Maxie Jones (Kirsten Storms) unwelcome advice. She’ll contend that since Maxie can’t decide what to wear, she should rethink going out with Peter August (Wes Ramsey).

Maxie obviously won’t believe this is warning sign, so her date will proceed as planned. She’ll look forward to beginning this new romantic chapter. Before Peter meets up with Maxie, he’ll be greeted by a chipper Lulu Falconeri (Emme Rylan). She’ll announce that she’s back and ready to work, so Peter should be surprised by what Lulu’s cooking up. It might tie in with Peter’s intriguing book idea.