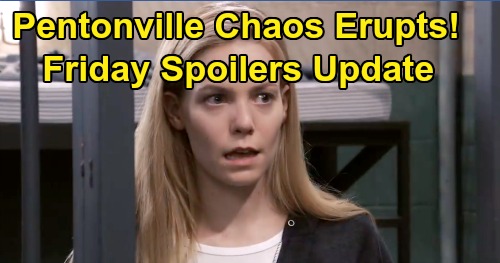 General Hospital (GH) spoilers update for Friday, July 26, tease that Ava Jerome (Maura West) and Nina Reeves (Cynthia Watros) will face some friction. It looks like Nina may go for a low blow by bringing Kiki Jerome (Hayley Erin) into this. Nina might have something negative to say about Ava’s treatment of Kiki before her murder. She may offer her own relationship with Sasha Gilmore (Sofia Mattsson) as an example of a healthy bond.

However, Ava will suggest that Nina shouldn’t look down since it’s a long way to fall. She’ll think high-and-mighty Nina will eat her words eventually. Ava might contend that no mother-daughter relationship is perfect, so Nina needs to be prepared for trouble. GH fans know that’s true since Sasha’s been deceiving Nina from day one.

In the meantime, Valentin Cassadine (James Patrick Stuart) will follow orders and arrive to pick up Liesl Obrecht (Kathleen Gati) at GH. He’ll explain his instructions, but Liesl will give him an evil glare. General Hospital spoilers say Liesl will definitely put up a fight. She won’t want one of her many foes to be her ride home.

Down the hall, Franco Baldwin (Roger Howarth) will meet Ava’s second opinion. Sibley Gamble (Veronica Cartwright) supposedly channeled Kiki, but Ava didn’t like what she heard. Kiki still hates her, so she’ll hope her new psychic can get in touch with Kiki again and score her better results. Chelsea (Jen Ray) will cross paths with Franco and get grilled about a tricky situation he’s facing.

Franco may wonder what Chelsea can tell him about Liesl’s drunken claims. He realizes Dr. O knows something about “Wiley Cooper-Jones’” real father, but he hasn’t been able to pry any details out of her. Chelsea may not be able to provide an accurate reading on that, but she’ll definitely have one for Franco himself. She’ll insist that Franco shouldn’t go for a drive, but he’ll think that sounds awfully silly.

Later, Franco will step in and save Valentin from all the Liesl drama. He’ll offer to be Liesl’s ride instead, which is dangerous if you believe Chelsea the psychic. Fortunately, it seems Franco and Liesl will make it to their destinations safely. Franco may think Chelsea just made up his warning, but he really should heed it. Danger is indeed brewing for Franco in the near future.

Other General Hospital spoilers say Harrison Chase (Josh Swickard) will push for peace. He was a bit harsh with Hayden Barnes (Rebecca Budig) when he first met her, but she was facing attempted murder accusations. It didn’t help that Hayden had a record a mile long.

However, Hamilton Finn (Michael Easton) talked about his intense connection with Hayden and let Chase know she really helped him. Chase also has some sympathy for Hayden over the baby he thinks she lost. He’s a guy who believes in second chances, so he’ll hope they can wipe the slate clean.

It appears Hayden will be on board with hitting the reset button since she’s not very well-liked around PC. If someone’s willing to give her a fresh start, she should welcome that. At the Metro Court, Jasper “Jax” Jacks (Ingo Rademacher) will be treated to his hair share of alcoholic beverages. It looks like Carly Corinthos (Laura Wright) will let Jax sample several bottles on the house, so he’ll wonder what’s up.

Carly will explain why she wants to show her appreciation. She may hope to get Jax’s opinion on her offerings, but the real reason is probably she just cares about him and wants to talk. Carly’s been upset about her baby’s looming surgery, so she might confide in Jax and get some comfort on Friday.

Of course, GH fans know “Wiley” is actually Jonah Corinthos, so Nelle will start to worry. She’s been harassing Michael Corinthos (Chad Duell) to mess with him, but she’ll grow genuinely concerned for their little boy. As a result, Nelle will determine that she has to tell Michael the truth. She’ll convince him to come sit down for a meeting with her, but fate will intervene before she can confess.

General Hospital spoilers state that some technological chaos will strike. Will there be a power failure or maybe an alarm system malfunction? Whatever the case, Nelle will have to postpone her admission. It’ll give her time to come to her senses and realize she has to keep manipulating Michael. It seems Nelle still won’t want the Corinthos clan to win, so she’ll only offer a cryptic hint.

It sounds like the action’s about to heat up. We’ll give you updates as other GH news comes in. Stick with the ABC soap and don’t forget to check CDL often for the latest General Hospital spoilers, updates and news.