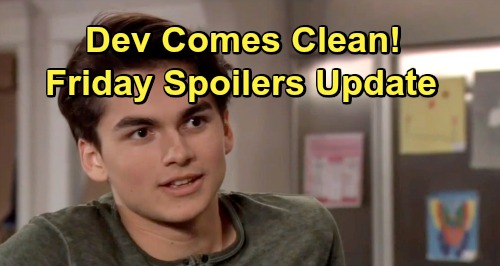 General Hospital (GH) spoilers update for Friday, July 5, tease that some shocking moments are on the way. Before we get to all the action, there’s an important programming note to pass along. A rerun of GH aired on Thursday, so the first new episode is Friday. Luckily, General Hospital will deliver some great scenes that are worth the wait.

At Pentonville, Jason Morgan (Steve Burton) will try to get through to Harmony Miller (Inga Cadranel). He’ll suggest that Willow Tait (Katelyn MacMullen) has been through enough and hope Harmony can at least give her the truth. Jason will contend that Harmony owes Willow that much. He’ll push his imprisoned mom to reveal how Douglas Miller really died.

Jason already knows the answer, but he’ll need Harmony on his side against Shiloh Archer (Coby Ryan McLaughlin). Her testimony could be crucial if they want to succeed in taking him down. Sam McCall (Kelly Monaco) will work another angle at the diner in Beechers Corners. She’ll pose as a waitress as she tries to get a statement from Carol Lockhart (Mandy Musgrave).

Other General Hospital spoilers say Shiloh’s lawyer will ask about his true goal. Zahra Amir (Maysoon Zayid) will want to know if Shiloh’s focused on reclaiming his child or the child’s mother. She’ll hope to shift Shiloh’s attention from Willow to “Wiley Cooper-Jones,” and it appears that plan will pay off. Shiloh will indeed concentrate on doing whatever it takes to get his hands on his son.

However, things are bound to get complicated soon. If Shiloh runs a DNA test using that baby cloth, he won’t get the match he expects. The real Wiley is dead, so we’re quickly inching toward that revelation. Meanwhile, Trina Robinson (Sydney Mikayla) will realize there’s been some tension between Dev (Ashton Arbab) and Josslyn Jacks (Eden McCoy). She’ll wonder how Dev managed to make Joss so mad.

Dev may bring Trina up to speed on their opposing perspectives. Josslyn’s convinced that Oscar Nero Quartermaine (Garren Stitt) reached out to her, but Dev just doesn’t think that’s possible. He should’ve been more sensitive to Joss’ feelings, but Carly Corinthos (Laura Wright) suggested her daughter should cut Dev some slack. He’s been through a lot and is alone in a brand-new country.

Now it might be Trina’s turn to give Dev some useful advice. He’ll hopefully get on Josslyn’s good side as time goes in. Until then, Josslyn will decide if she’s going to accept Cameron Webber’s (William Lipton) invitation. He’s hoping Joss will come to Franco Baldwin (Roger Howartn) and Elizabeth Baldwin’s (Rebecca Herbst) wedding reception with him.

Josslyn looked freaked out by the suggestion, so she may not be super into the idea. She may feel like it’s too soon to be attending events with another guy. Regardless, General Hospital spoilers state that Cam will feel pretty uncomfortable around Josslyn this Friday.

Next, Sonny Corinthos (Maurice Benard) will turn to Brick (Stephen A. Smith) for assistance. Since Sonny got Gladys to accept the cash and future payment plan, they’re halfway there on selling the cousin lie. Sonny will just need Brick to take care of a few more details. He’ll count on Brick to keep Dev from being deported, which would essentially sentence the teen to death.

Kristina will insist on talking through her issues with Alexis right then and there. She’ll worry she’ll lose her nerve if it doesn’t happen immediately. It sounds like Neil will have to suck it up and give them a joint therapy session. Kristina will probably reveal the contents of her pledge, which should sting for Alexis at first. Fortunately, it could also be a huge step toward healing for Kristina and Alexis.