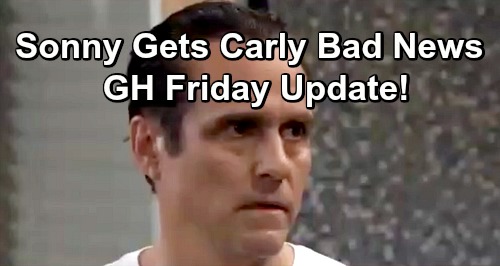 General Hospital (GH) spoilers for Friday, March 22, tease that Brad Cooper (Parry Shen) will have to stay on guard. He can’t let himself get too comfortable when it comes to the secrets he’s keeping. Brad has filled Julian Jerome (William deVry) on part of what happened the night he swapped the real Wiley Cooper-Jones for another child. He just hasn’t told Julian that the new Wiley is actually Jonah Corinthos!

Brad will exhibit some weird behavior in Friday’s episode, so Julian will suspect trouble. He’ll feel like Brad’s leaving something out, so this could be about the swap story or some Willow Tait (Katelyn MacMullen) incident. Speaking of Willow, she’ll have her hands full with Shiloh Archer (Coby Ryan McLaughlin) across town. Shiloh will try to intimidate Willow, but she’ll hope she can turn the tables.

When Shiloh makes some veiled threats, Willow will make one that’s crystal clear. She’ll point out that she could easily use what she knows about Shiloh against him. That includes the fact that he raped her and whatever Willow learned as part of his exclusive circle of trust. Willow undoubtedly shared a secret of her own to join that trust, but protecting “Wiley” will be her only concern.

Other General Hospital spoilers say Ava will hope to offer protection as well. It looks like she’ll advise someone to avoid her, so that may be Dr. Griffin Munro. He was asked to track Ava down and speak with her, but she may be too broken to share much with her ex.

GH fans can also expect a rough time for Dr. Kevin Collins (Jon Lindstrom). He just took a punch down by the docks, so Griffin most likely delivered it. Since Griffin overheard Kevin was partially responsible for Ryan Chamberlain’s (Jon Lindstrom) killing spree, that was probably a good dose of revenge.

Griffin will work through some of his anger on Friday, but it won’t help him truly move on. To do that, it seems Griffin will have to leave Port Charles. General Hospital spoilers say Friday, March 22, will be Matt Cohen’s last airdate, but his exit will be left open-ended. With any luck, we’ll see Griffin again someday.

Over with Jordan Ashford (Briana Nicole Henry), she’ll have an important meeting with the DA. Margaux Dawson (Elizabeth Hendrickson) will note that Kevin is a liability and has to be dealt with. Dr. Collins probably shouldn’t advise them on any more cases. Margaux might even search for some criminal charges to file against him, but she won’t settle on anything that would stick.

Next, Laura Webber (Genie Francis) will reach out to Jordan. She won’t like it when she hears the PCPD is dropping Ryan’s case, which means the hunt will be called off. Ryan is one tricky villain, so Laura may worry that he’s still out there somewhere and will return to target those he left behind.

Meanwhile, Sonny Corinthos (Maurice Benard) will be appalled by Carly Corinthos’ (Laura Wright) crazy news. She’ll have to explain how she was kidnapped by Ryan, the real serial killer. Sonny still believes Franco Baldwin (Roger Howarth) is to blame, so he’ll be thrown for a loop. He’ll be grateful that Jason Morgan (Steve Burton) could step up for Carly after Ryan left her to die.

Carly will reassure Sonny about their baby as they share a warm moment. Some warm moments will also be underway soon for Lulu Falconeri (Emme Rylan) and Dante Falconeri (Dominic Zamprogna). Lulu will fear someone’s breaking in her home on Friday, but it should be her husband’s long-awaited homecoming instead.

General Hospital spoilers say this “Lante” reunion will fill their hears with joy. Dante and Lulu have more obstacles ahead of them, but they can just savor being together for now. We’ll give you updates as other GH details emerge. Stay tuned to the ABC soap and don’t forget to check CDL often for the latest General Hospital spoilers, updates and news.