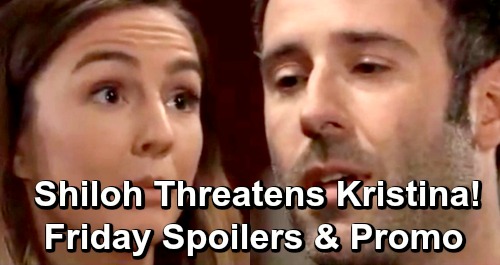 General Hospital (GH) spoilers for Friday, May 10, tease that Peter August (Wes Ramsey) will continue to charm Maxie Jones (Kirsten Storms). They were on their way to Paris when we last saw them, so they’ll have landed when we see them next. Maxie will tell Peter she’s having the best time, and he’ll undoubtedly insist he’s having a blast, too. These two will definitely be feeling the love!

Back in Port Charles, Jordan Ashford (Briana Nicole Henry) will talk to T.J. Ashford (Tajh Bellow) at GH. He may feel like Curtis Ashford (Donnell Turner) should be there supporting Jordan, but she’ll point out that he’s searching for Ryan Chamberlain (Jon Lindstrom). Jordan will be adamant that she’s fine on her own. She’ll think Curtis’ mission is urgent and necessary, so he’s right where he needs to be.

Meanwhile, Curtis and Laura Webber (Genie Francis) will mull over the plot to draw Ryan out. They’ve teamed up on the serial killer hunt, but they’ll take a break for a meal on Friday. General Hospital spoilers say Laura will use this opportunity to discuss what’s next. She’ll think they need to find Ryan before he finds Ava Jerome (Maura West) and Dr. Kevin Collins (Jon Lindstrom).

Laura certainly won’t want Kevin and Ava to put themselves in harm’s way. This scheme is incredibly dangerous, so tracking Ryan down is crucial. Over with Kevin, he’ll have some concerns about how Ava wants to handle this. She’ll hope to finish Ryan off once and for all, but Kevin should advise against anything dangerous. He won’t think it’s worth it if Ava puts her own life on the line.

Other General Hospital spoilers say Dr. Neil Byrne (Joe Flanigan) will give Sonny Corinthos (Maurice Benard) some advice. It looks like Sonny will grow worried over Kristina Corinthos-Davis’ (Lexi Ainsworth) trip out of the house. She’s staying with Alexis Davis (Nancy Lee Grahn) right now, but she decided to go out for a bit – and it turns out she lied about where she was headed.

Sonny will won’t know that, but he’ll still fear Kristina could end up back at DoD with Shiloh Archer (Coby Ryan McLaughlin). Neil will urge Sonny to trust his daughter and let her go, but that’ll be difficult for this troubled father. Sonny loves Kristina and wants to protect her, so he’ll certainly keep an eye on the situation.

Of course, GH fans know Kristina just showed up at the Dawn of Day community home. She’ll ask Shiloh for her pledge back on Friday, but that’s obviously not happening. Shiloh will inevitably remind Kristina that she made a commitment and has now broken it. He’ll probably insist there could be dire consequences if Kristina doesn’t return and keep her promise.